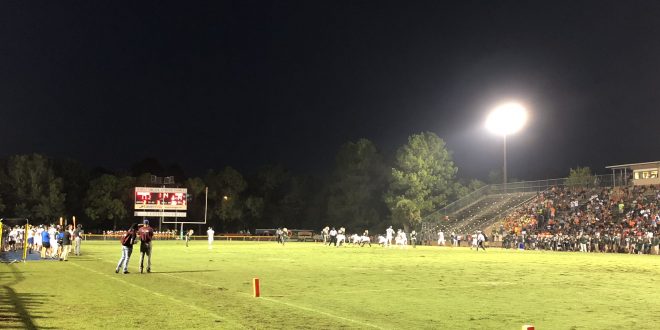 With two games under each teams belt, high school football enters week three here in Alachua County. There are some big matchups tonight including:

Gainesville High School and Newberry High School will sit out this week and return to action next Friday, Sept. 14.

The Buchholz Bobcats prepare to host non-conference opponents, the Columbia Tigers, in the marquee matchup tonight. Buchholz is coming off a 25-14 loss to Vanguard last week. With a 1-1 record, they’ll be looking to get back in the win column tonight against Columbia. The 2-0 Tigers haven’t dropped a game yet, including a 44-21 win against Gainesville High.

In order to take down Columbia, Buchholz will need to improve their offense from last week where they totaled 189 yards to Vanguard’s 403 yards. A pass from quarterback Camden Orth to Roderick Jackson brought the Bobcats to within 11 points with 1:22 left in the game, however, they failed to convert anything after. A bright spot for Buchholz was defensive end Noah Keeter, with four sacks in the first half. The Bobcats will have to build off their defense and return to the offensive prowess they showed in their 38-27 win against Eastside in week one.

The Eastside Rams also enter week three with a 1-1 record, having fallen to Buchholz 38-27 in week 1, and then bouncing back with a 42-20 win against Williston. The Rams will travel to Spring Hill to take on the Brooksville Central Bears, who are 0-2 on the season.

The Rams will hope to take advantage of a weak offense from the Bears who have only managed to get tally 12 points over two games. Eastside will look to replicate last weeks explosive offense led by quarterback Anthony Richardson. Richardson, a UF commit, totaled 164 yards on 9 carries against Williston, including a touchdown in the opening drive. If they build off of their offense, Eastside can add another win to their record tonight.

The Hawthorne Hornets and P.K. Yonge will look to improve to 3-0 at the expense of one another. Hawthorne took down Interlachen 69-0 and North Florida Educational Institute 60-0. They have yet to concede any points, but their defense will truly be tested tonight against P.K. Yonge.

P.K. Yonge defeated Wildwood 25-6 and Keystone Heights 41-14. First-year coach Marcus McDonald has the Blue Wave with a 2-0 record for the first time since 2014. They’ll match up against a pretty impressive offense in the Hawthorne Hornets, which will be McDonald’s first big test as head coach. They’ll look to continue their energetic offense led by quarterback Carter Kutchko and wide receiver Israel Wilcox.

Following an impressive 31-13 offensive performance against Newberry, the Santa Fe Raiders followed with a 35-6 loss to the Gainesville Hurricanes. Tonight they’ll take on the Fort White Indians hoping to improve to 2-1. The Indians have only played one match, losing 35-19 to Suwannee.

In their loss to Gainesville, Santa Fe’s Deron Reid was the bright spot, totaling 147 rushing yards and tallying the only touchdown for the Raiders. Santa Fe failed to ignite their offense last week, and are looking to return to the offense they displayed in their first week. In order to do so, they’ll have to provide Reid with some help on the offensive front.