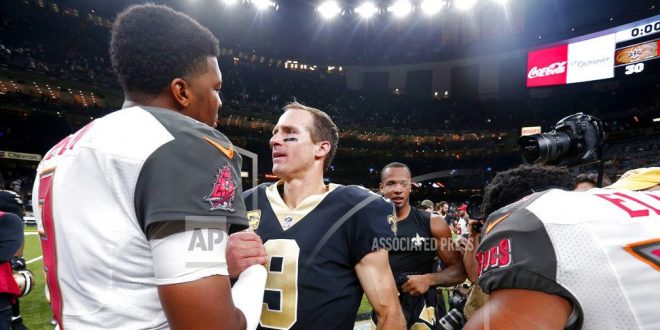 The NFL regular season has started back up, and Sunday afternoon the New Orleans Saints host the Tampa Bay Buccaneers.

Bang For the Bucs Strategy

The Tampa Bay Buccaneers are back with their first game of the regular season in a hard road game in New Orleans.

The Bucs are lead by their 4th-year quarterback Jameis Winston who has shown much potential throughout this season. Winston, however, will not play this Sunday due to a suspension handed down by the NFL. The reasoning for his suspension was violating the league Personal Conduct Policy for an incident back in 2016.

The starting quarterback who will start in is replacement Sunday is Ryan Fitzpatrick. Fitzpatrick led the Bucs to two victories last season in both his starts for the Bucs.  He gained 1,103 yards through the air and threw seven touchdowns. This will be his second year with Tampa Bay.

Look for these guys to come out strong and have an impact in our season opener.#GoBucshttps://t.co/jFcYbngTV8

The Saints come into the season locked and loaded to play.

Drew Brees says this first game may be a tough task due to knowing that the Buccaneers have a chip on their shoulder from last season.

Another valuable player that won’t play is Saints running back Mark Ingram, due to suspension for testing positive for performance enhancing drugs. Ingram led the team last season with 1,124 rushing yards and 12 touchdowns.

For running game options, the Saints signed former Gator Mike Gillislee three days after the NFL preseason was done. A good addition for the Saints, he has a decent resume as a running back playing for prior teams such as the Dolphins, Bills and Patriots, who he most recently played for last year but cut him in training camp.