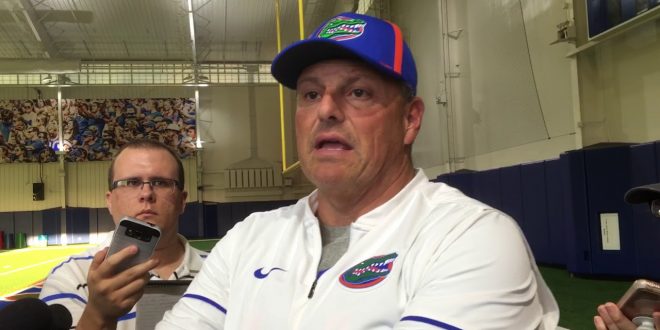 Grantham looks to move forward after loss to Kentucky

Last Saturday the Florida Gators surrendered a 31 win streak against the Kentucky Wildcats. A big part of this loss was a poor performance from the defense. With giving up more than 300 yards rushing, defensive coordinator Todd Grantham was straight to point stating “We got our tails kicked. You can’t hide that.”

“We always talk about stopping the run and affecting the quarterback. We didn’t do either one in the game and didn’t give ourselves a chance to win because of that,” Grantham said.

The 5 year SEC coach didn’t lose faith in his unit as he believes knows how to fix their problems.

” We need to practice and develop more while practicing.”

Coach also states that if the Gators defense can play with the effort and energy they talked about before the season they will get better and develop.

Looking Ahead to Colorado State

With the return of linebacker David Reese and defensive lineman CeCe Jefferson, the Gators will look forward to their matchup against Colorado State on Saturday. Looking into this matchup, Colorado State quarterback K.J. Carta-Samuels has been looking sharp for the Rams. In his debut, Carta-Samuels threw for a school record of 537 yards and five touchdowns and threw for 400 yards last week against their win vs Arkansas. With a good versatile quarterback

“talented wideouts, solid running back, and a talented tight end” as stated by Coach Grantham, this Colorado State team will be a dangerous but fun matchup for the Gators.