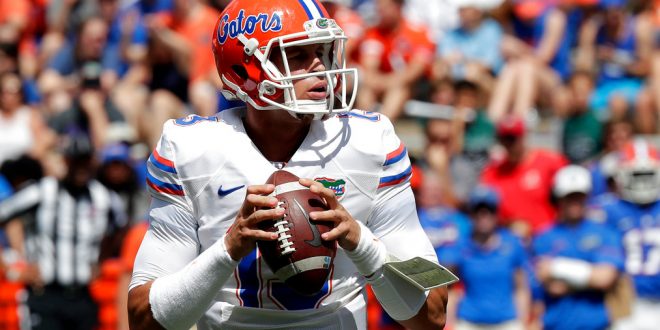 FILE - In this April 14, 2018, file photo, Florida quarterback Feleipe Franks looks for a receiver during an NCAA spring college football intrasquad game, in Gainesville, Fla. Feleipe Franks insists he has nothing prove. Coaches, teammates and close to 90,000 people at Florida Field on Saturday probably would disagree. (AP Photo/John Raoux, File)

The Florida football team snapped a 31-year win streak over the Kentucky Wildcats on Saturday. The Gators ended the nation’s longest active win streak in college football by falling 27-16 to Kentucky.  However, Florida quarterback Feleipe Franks says the Gators will bounce back.

Franks first impressions after watching film from Saturday’s game is that things need to get better. The Gators need to prepare better as a team and become more physical in practice.

“There’s little things we need to fix,” said Franks, “And one of them just happens to be being more physical in practice.”

Franks said physicality in practice is different from the previous season but at the same time it needs to pick up and the Gators will continually work on that throughout the season.

“You can’t halfway go in practice,” said Franks, “You have to go full speed.”

“There’s a little bit of nitpicking at a little bit of everything but you know, I’m always working on being a better player,” said Franks, “There’s things that I’ll get coached up and I’ll get fixed.”

Franks and head Florida football coach, Dan Mullen, both ensured that even if the Gators were able to pull off the Hail Mary, the problems the team had on Saturday would still need to be addressed and fixed at practice.

Responding to the Loss

“Wins and losses happen when you play the game of football,” said Franks, “No we’ll definitely bounce back. We’ll be fine.”

The Gators will take on Colorado State for week three on Sept. 15 in the Swamp.