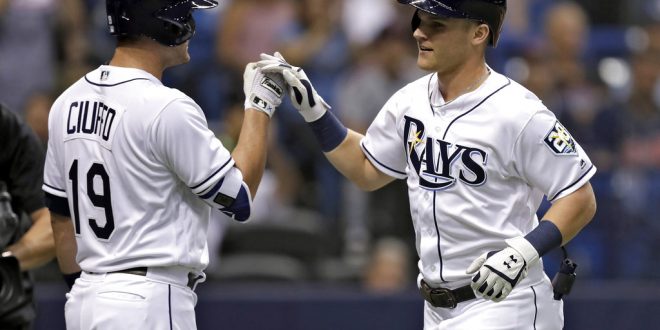 The Tampa Bay Rays are 15 games over .500 right now with a record of 79-64 but they are somehow still 18.5 games back in the AL East. The Tampa Bay Rays have the misfortune of being in the American League East, arguably one of the best divisions in baseball. The Yankees and the Red Sox have made it nearly impossible for the Rays to win the division with both of them sitting comfortably above 90 wins. However, that hasn’t stopped the Rays desire to win.

The Rays have played really impressive baseball in 2018, although, you probably wouldn’t know it. The New York Yankees and the Boston Red Sox have seized the baseball spotlight thus far in 2018.

The Red Sox got off to a hot start back in March and haven’t slowed down. The Sox have the best record in all of baseball with 98 wins and just 46 losses. With nearly 20 games left in the season, the Sox could finish with one of the winningest seasons of all time.

The Yankees are on pace to win 100 games this season but are still eight games back in the division behind the red-hot Red Sox. The Yankees have been on a rollercoaster of a season, losing the games they should win and pulling miraculous wins out of nowhere. Nonetheless, they have managed to earn a 90-54 record and will likely make the playoffs thanks to an American League Wildcard spot.

The Rays have nearly the lowest payroll in all of Major League Baseball: 29th out of 30. Their AL East counterparts in New York and Boston have two of the top five highest payrolls in all of baseball: The Yankees are 1st overall and the Red Sox are 4th. Even with the impressive track records and big pockets of New York and Boston, the “bottom of the barrel” Rays have clearly outperformed their AL East rivals over the last several months.

Down but Never Out

The Rays have some of the most impressive stat lines of the season: (1.) They have won 17 of their last 20, (2.) they are 33-8 at home since June 11, and (3.) they are on a current 12-game winning streak at home. It is hard to believe that a team performing this well has a slim chance of playing October playoff baseball. But that’s baseball.

The Rays are just 7.5 games back of a spot in the American League Wildcard with 19 games left to play. There is a lot that could happen in 19 games and it doesn’t seem like the Rays are giving up just yet.

Tampa Bay is still seeking that elusive World Series title 20 years after their establishment in 1998. The World Series win may not happen in 2018, but if nothing else, this season has certainly been promising for Rays fans and it seems that the future is swinging in their favor.