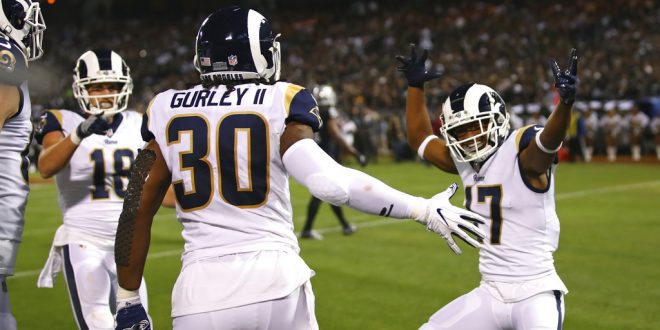 Los Angeles Rams running back Todd Gurley is greeted by teammates Cooper Kupp (18) and Robert Woods (17) after scoring a touchdown during the first half of an NFL football game against the Oakland Raiders in Oakland, Calif., Monday, Sept. 10, 2018. (AP Photo/Ben Margot)

No preseason snaps? No problem. That was the mentality LA Rams head coach Sean McVay had with all of his starters through four preseason games. This rare and unorthodox decision worked well for the visiting Rams as they defeated the Oakland Raiders 33-13 at Oakland-Alameda County Coliseum.

Jon Gruden’s anticipated return to the sidelines was soiled and he’ll have to wait until next week to potentially get his first win since 2008. But, the game was much closer than the final score actually shows us. The Raiders were leading at halftime and we’re hanging on with the Super Bowl contenders. But, once the second half started, their $125 million quarterback Derek Carr went cold and completely imploded.

Gruden’s Offense to a Hot Start

Carr completed 20 of his first 24 passes for 199 yards on one interception on an underthrown pass that could have been a touchdown. Marshawn Lynch went full beast mode in the first half. He looked like his old self on a 10-yard touchdown run. The Rams had him stood up at the 3-yard line before he pushed driving his legs and getting some help from the offensive line to push through the goal line.

Plus, Tight End Jared Cook played to his fullest potential with 9 catches for 180 yards. The former Packer broke the record for most receiving yards by a Raiders tight end which was 173 yards by Todd Christensen against the San Diego Chargers back in 1986, according to UPI.com. Cook had many Oakland fans and coaching staff ecstatic but the offense just couldn’t come up with anything in the second half, amounting to a solid goose egg. Amari Cooper was not involved in the game whatsoever, he finished with one catch for 9 yards.

Carr ended with 3 interceptions on the night, with two of them intended for Cook. Rams defensive coordinator shook things up in the second half and let Aqib Talib and other cornerbacks to take over on Cook as a reassignment, worked out well in the Rams favor.

Goff completed 18 of 33 passes for 233 yards, incorporating new receiver Brandin Cooks into the mix. The talent on the Rams offense is something close to extraordinary as they have revivers like Robert Woods and Cooper Kupp. Don’t forget about reigning offensive player of the year running back Todd Gurley. But, the rust showed itself on the Rams defense, especially in the first half.

It took them a whole half to adjust and dominate but there’s still room for improvement. The Rams have big names on the defensive side like Ndamukong Suh, highest paid defensive player Aaron Donald and Michael Brockers. What was ironic is how Donald signed a $135 million contract just 10 days ago and could only record one tackle and no sacks throughout the season opener.

On the offensive side, Gurley ran for 108 yards in 20 carries. He also caught three passes, including a shovel pass that he turned into a 19-yard touchdown which has fantasy owners feeling good about their pick so far. Nobody should be surprised.

On top of that, fantasy beast of a kicker Greg Zuerlein went four of five and made a season leading 55-yard field goal attempt.

Brandin Cooks was also the focal point to the Rams victory. he caught five passes for 87 yards which made him an aerial assault. If Goff can feed him the ball more especially in deep throw situations, then the Rams will be extremely scary down the road.

Then, the dagger that sealed the game was on the third and final interception of the night for Derek Carr was ran back for a pick-six by Marcus Peters. Peters channeled his inner Beast Mode and imitated Lynch’s famous touchdown celebration.

The Raiders will fly to Colorado and visit the 1-0 Denver Broncos in an AFC West Division rivalry matchup next Sunday.

Meanwhile the Rams will have their home opener against the visiting Arizona Cardinals in an NFC West Division showdown next Sunday.

Recent grad from the University of Florida. Editing all articles on here while helping out the newbies. Love all things basketball.
@@MarcoJMartinez_
Previous New York Jets Win Big Against Detroit Lions, 48-17
Next Mullen said it’s time for his Gators to play more physical