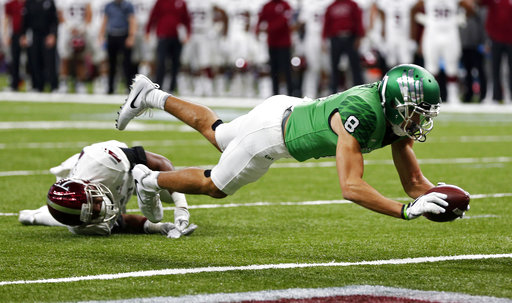 After the Arkansas Razorbacks dropped last week to Colorado State, they come back to Fayetteville to take on the North Texas Mean Green. Here are a few storylines to follow during the game.

The Arkansas defense got torched by the CSU defense last week. Just torched. The Rams’ offensive attack was very clear, as they tossed 50 passes as opposed to 23 carries. Quarterback K.J. Carta-Samuels logged 47 of those throws for 389 yards and two touchdowns.

The Razorbacks will need to recover quickly though, as North Texas has its own formidable passing attack. Last week against Incarnate Word, albeit against a weak opponent, Mean Green quarterback Mason Fine went 25 for 40 for 418 yards and four touchdowns. Arkansas needs to have a good week of practice leading up to the game to shore up its secondary.

Razorbacks head coach Chad Morris says his team has had exactly that this week.

In addition to Carta-Samuels, the Mean Green have a few other playmakers on offense to make Carta-Samuel’s job easy. Wide receivers Rico Bussey Jr. and Jalen Guyton give North Texas a dynamic duo.

Last week against Incarnate Word, Bussey Jr. was a force on the field, logging eight receptions for 128 yards and three touchdowns. Similarly, Guyton also topped 100 yards, hauling in five passes for 111 yards and a touchdown.

Expect the team to throw the ball as much as possible against the Razorbacks.

One of the biggest storylines heading into the North Texas game for Arkansas was who would start at quarterback. Three weeks into the season, Morris says he still has yet to make a decision.

Against Colorado State, Cole Kelley was the far better QB between himself and Ty Storey. Kelley went 6 for 9 with 102 yards and two touchdowns, good enough for a 76.0 QBR. On the other side, Storey went 5 for 13 for 36 yards, no touchdowns, two interceptions and a 10.7 QBR.

The Razorbacks will need to rely on their rushing game as its clearly the focal point of the offense. Look for running back Devwah Whaley to log at least 25 rushes for the team to try and get back on track.

“WALKS INTO THE END ZONE!”pic.twitter.com/uUa0Jv5CQM

Arkansas will need a big game from its offensive line for a win this game.

Chris O'Brien is a rising sophomore at the University of Florida. He aspires to be an on-air sports anchor someday.
Previous College Football Preview: Georgia Bulldogs Host Middle Tennessee
Next CFB Preview: UTEP travels to Knoxville to play Tennessee Vols 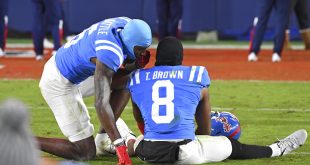 Another exciting SEC matchup in college football is on tap for Saturday night. The No. …