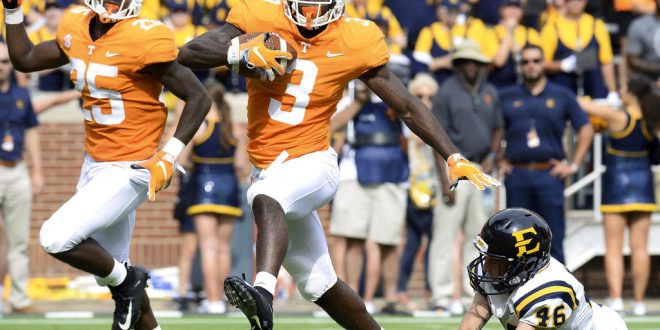 The University of Texas at El Paso (UTEP) Miners travels to Knoxville to take on the Tennessee Volunteers at Neyland Stadium. The Conference USA team has yet to secure a win after losing two straight games by more than 20 points. On the other hand, the Vols improved to 2-1 after a 59-3 win over ETSU last week, giving Head Coach Jeremy Pruitt his first win on the job.

First-year UTEP Head Coach Dana Dimel has work to do to turn around a program that has been outscored 97-34 in two games. Miners quarterback Kai Locksley, whose father Mike Locksley is the offensive coordinator at Alabama, coached with Pruitt when Pruitt was defensive coordinator last year. Locksley has contributed two touchdowns while sharing snaps with Ryan Metz.

UTEP has quality on defense with Kalon Beverly and Nik Needham at cornerback and AJ Hotchkins at linebacker, but the team has forced only one turnover and three sacks. UT running back Tim Jordan will give the defense trouble. The Miners have allowed 5.66 yards per rush and 521 in total after two games.

A game versus UTEP will likely result in the Vols winning in a dominating fashion once again. Last weeks win resulted in freshman cornerback Bryce Thomspon winning SEC Freshman of the Week after an interception for 21 yards, four tackles, two tackles for losses and one pass break up against ETSU. Furthermore, wide receiver Jordan Murphy led all SEC receivers in Week 2 with the highest receiving grade (90.2).

With opportunities to play before the SEC opener versus Florida, Pruitt said the team needs to take advantage of opportunities like playing multiple quarterbacks. Tennessee plans on redshirting quarterback Will McBride.

Pruitt also discussed how competition will make the team better.

Additionally, Pruitt said that wide receiver Jauan Jennings can make plays as the season goes on depending how he practices.

UTEP and Tennessee will kick off at noon on Saturday.