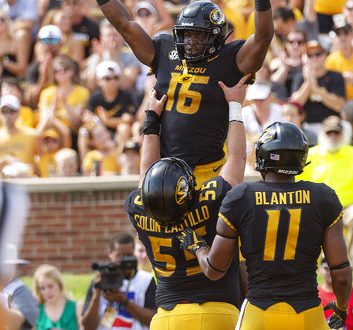 Missouri Looks For Revenge Against Purdue

The Missouri Tigers are looking for revenge against the Purdue Boilermakers in their matchup on Saturday. Last season, Purdue crushed Missouri 35-3. The Tigers will look to bring victory back home from Ross-Ade Stadium this year with kickoff starting at 7:30 p.m.

The Tigers started their season off strong as they are currently 2-0. Mizzou opened the season defeating UT Martin 51-14. Following UT Martin, the Tigers continued their winning streak by defeating the Wyoming Cowboys 40-13.

Head Coach Barry Odom believes preparation for this game is key, despite their early success this season.

Odom is excited about the improvements and changes the team has made, but he knows Purdue will still be a challenge this weekend.

The Boilermakers are in the complete opposite position as the Tigers. Purdue is currently 0-2 on their season losing 20-19 to Eastern Michigan and 31-27 to Northwestern.

Odom has heard great things about Purdue Head Coach Jeff Brohm and is looking forward to facing him.

To spice up the matchup even more, Tigers cornerback Adam Sparks will line up opposite of his brother, Purdue WR Jared Sparks.

Sydney is a senior studying telecommunications with a specialization in sports media at the University of Florida. She is a multimedia sports reporter for ESPN 98.1 FM/850 AM WRUF and WUFT-TV.
Previous High School Football Preview: St. Francis vs. St. John’s Country Day
Next UF Receivers Making Progress Going into Colorado State