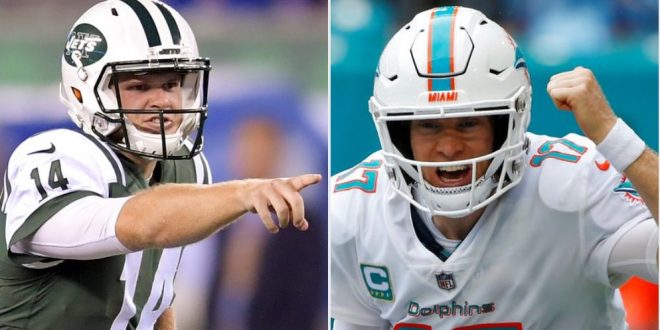 After the first week of the NFL season, there are still plenty of questions surrounding the Miami Dolphins and the New York Jets.

For the Dolphins, their opening home matchup against the Tennessee Titans was delayed twice due to bad weather. This led to the game taking 7 hours, 8 minutes to play.

Miami eventually won 27-20 over Tennessee, who lost starting quarterback Marcus Mariota to an elbow injury in the third quarter.

That's the ball game. Titans try onside kick and Jerome Baker recovers it for the Dolphins. After 7 hours and 8 minutes, the longest game in NFL history comes to a merciful end. #Dolphins 27 #Titans 20.

The Jets, on the other hand, made history of their own on Monday Night Football. New York put up 48 points in their game against the Detroit Lions, which is the most the points the team has scored on the road in franchise history.

Despite rookie quarterback Sam Darnold’s pick-6 on his opening pass, the Jets held the Lions to 17 points.

In week two, the Dolphins will be going to New York to take on the Jets this Sunday. Here is a preview of the game:

New York decided to roll the dice when they traded Teddy Bridgewater to the New Orleans Saints and tag Darnold as their starter. On Monday, despite a few mistakes, that decision worked out for the best.

After his opening pass was intercepted and returned for a touchdown, Darnold went 16-20 the rest of the game. The third overall pick in the 2018 NFL Draft threw for 198 yards and two touchdowns.

Darnold spoke to reporters after the game to address what he could have done better and to assess his overall performance:

While there was a lot to be excited about, head coach Todd Bowles emphasized the importance of moving on quickly. The fourth-year coach was pleased with his team’s execution, but he understands there are 15 more games left of football to play:

Dolphins Bouncing Back from a Long Game

Just like their fellow AFC East rival, Miami is not going to spend too much thinking about their week one victory. Head coach Adam Gase believes that his team has a lot of room for improvement, including his offense being able to capitalize better in the future:

One of the biggest storylines last week was the return of Ryan Tannehill. Last Sunday marked the first time in nearly two years that the Dolphins quarterback had played in a regular season game.

Tannehill, who went 20/28 for 230 yards with two touchdowns and two interceptions against the Titans, knows the importance of playing the Jets. Along with them being a divisional opponent, Tannehill said there is an extra energy when Miami plays New York.

“There always is an energy that goes with playing the Jets.” – @ryantannehill1

Check out the latest Sound Bites from practice. pic.twitter.com/4KRLqR3ZAw

Other News and Notes:

Previous No. 7 Auburn hosts No. 12 LSU in SEC Opener
Next Can the Bucs strong start be enough to overcome Eagles tough Defense?