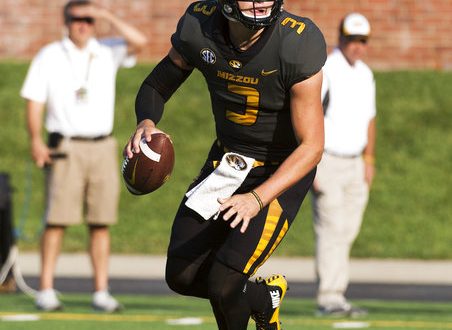 Missouri quarterback Drew Lock scrambles as he looks for a receiver during the third quarter of an NCAA college football game against Purdue Saturday, Sept. 16, 2017, in Columbia, Mo. (AP Photo/L.G. Patterson)

The Purdue Boilermakers (0-2) are desperately looking to send their fans home happy for the first time this season.

Meanwhile, their opponents on Saturday, the Missouri Tigers (2-0), are off to an impressive start to their season.

Two teams currently headed in different directions will clash from Ross-Ade Stadium in Indiana at 7:30 p.m.

Barry Odom’s team was able to open the season with two home victories of over 25 points to UT Martin and Wyoming. They’ll now go on the road, and Odom is making sure his team is up for the challenge.

The Tigers’ new offensive coordinator, Derek Dooley, is known for wanting to have a ground-and-pound offense. But Missouri’s offense has largely leaned on senior quarterback Drew Lock‘s great play.

Lock has already thrown for four touchdowns in each of his first two games without an interception. The senior has completed a whopping 74.3 percent of his passes, and he’ll look to continue that against Purdue. He’s projected to be a top-10 pick at quarterback come next April.

But many believe Odom’s offense will need to run the ball more effectively in order to manage a win on the road — especially against a desperate Purdue team.

Second year linebackers coach Vernon Hargreaves has also made this Tigers defense more stout and physical. Odom was quick to point out the qualities Hargreaves has brought to his program.

If Missouri plays as well they have been on both sides of the ball, they’ll likely come away with a 3-0 start to the season. Yet, the Boilermakers’ head coach, Jeff Brohm, will be desperate to inject life into his team on Saturday.

Improvement Needed on Offense for Purdue

A winless start to a season following three homes games would be terrible for any football program. Brohm and his team will look to avoid that Saturday, but they may have to do it without quarterback Elijah Sindelar.

The redshirt junior has played poorly in both games this season, and he walked off the field this week during practice with an undisclosed injury.

His status for Saturday is still questionable.

The Boilermakers aim for more downfield passing opportunities this weekend.

QB Elijah Sindelar describes what that means for the offense. #BoilerUp pic.twitter.com/A7Hvg77D4z

Sindelar’s backup, fifth-year quarterback David Blough, has received action in both games this season as well. While he hasn’t been as explosive, Blough is yet to turn the ball over compared to Sindelar’s three interceptions.

It may get rather ugly in West Lafayette, Indiana if the Boilermakers begin the season 0-3.

Purdue football will honor the military by wearing branch stickers on the back of their helmets, personally selected by each player.

Sports media and management student at the University of Florida. Content creator for ESPN 98.1 FM/ 850 AM WRUF.
@TheEdgarChavero
Previous P.K Yonge Blue Wave Coast by the Bronson Eagles
Next Gators Sweep the Day, Down JU and FIU 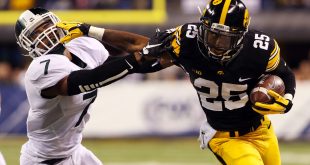 No. 2 Iowa Hosts Purdue for Homecoming