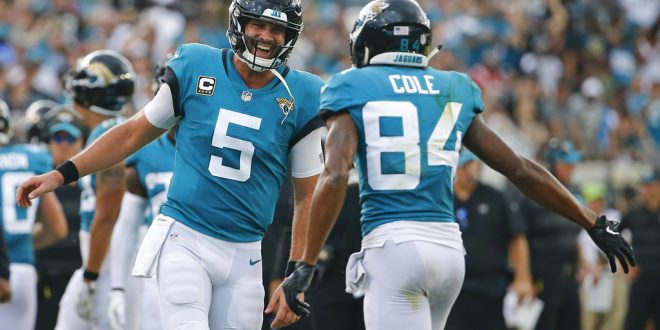 Blake Bortles steps up for the Jags

Last year’s AFC Championship game ended in heartbreak for the Jacksonville Jaguars. The Jaguars were up by 10 points over the New England Patriots in the fourth quarter. They were less than 15 minutes away from their first Super Bowl appearance in franchise history when it all went wrong. Jacksonville quarterback, Blake Bortles, lost his momentum right as Tom Brady found new life and breathed it into the Patriots, leading them to a 24-20 victory of Jacksonville.

The Jaguars 2017-2018 season was one for the record books: The Jaguars playoff appearance last year was their first since 2007.

Before last season, the Jaguars hadn’t been a feared opponent in the NFL for over a decade. They were continuously losing season after season and there wasn’t much hope surrounding the team and the direction they were headed.

You have the Tom Brady’s, the Aaron Rodgers, etc., but the Jags hadn’t had anything remotely close to that in years. Then, in 2014, Jacksonville drafts Blake Bortles from the University of Central Florida.

No one really knew what to expect out of Bortles, but what they did know is that he was new, fresh and offered a glimmer of hope. Bortles was quickly thrown into the spotlight and took over as the starting quarterback in week four of the 2o14 season. Unfortunately, he began his NFL career taking 55 sacks and earning a 3-10 record as a starter.

In his second and third years as the starter, Blake had some better moments and more refined skills. However, the Jags still finished with losing seasons. Bortles wasn’t completely to blame for the woes of the Jags, but he continued to catch the brunt of the criticism anyway.

In 2016 the Jaguars decided to cut ties with their failing head coach in Gus Bradley and also their offensive coordinator at the time, Greg Olson. Doug Marrone was named the interim head coach and coached the final two games of the 2016 season. In January of 2017, the Jags removed his interim title and named him as the official head coach. Marrone was exactly what the Jags needed but never knew they wanted.

Bortles had to deal with much scrutiny during his first four seasons in Jacksonville. However, since Marrone stepped in, fans and critics alike have begun to sing a different tune when it comes to the Jacksonville quarterback.

I want to publicly apologize to Blake Bortles. I didn’t think he had it. I said Jacksonville should draft a QB. I was wrong.

In 2017 the football world got to see a different Bortles. We saw a Bortles that wasn’t throwing as many interceptions and was throwing for more yards. He certainly wasn’t close to perfect and we all still acknowledged that he had room to improve. Nevertheless, what we did see was a more confident quarterback who had the drive and talent to lead his team to a winning season, the playoffs and almost a Super Bowl.

The Jaguars met their demise in the Patriots and Tom Brady last year. However, they had a chance at redemption in week 2 this year. The Jaguars hosted the Patriots on Sunday in their home opener. The Jaguars were without their star running back, Leonard Fournette, but that didn’t stop Blake Bortles.

Jacksonville surged past New England and won the rematch 31-20. Bortles finished the game 29-of-45, passing for 377 yards with four touchdowns. Bortles was aggressive and precise, which is exactly what the Jaguars needed.

He has shown promise year after year, but some are still skeptical and aren’t sure if he is, in fact, the answer for the Jaguars. The Jaguars have taken a chance on him and given him the opportunity to be THE guy. We can’t really be sure what is to come from Bortles in the future. However, what is certain right now is that he has temporarily silenced the critics. Jags fans can only hope that this isn’t a fluke and he really is the real deal.

Previous Feleipe Franks on Florida facing Tennessee: We’re up for the Challenge
Next Quarterback Controversy in Tampa Bay