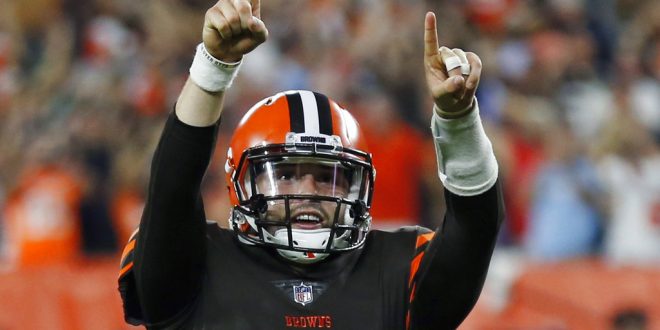 The Cleveland Browns announced that Baker Mayfield would be the starting quarterback for the franchise. The No. 1 pick of the NFL Draft will get his first start against the Oakland Raiders this Sunday.

Browns Head Coach Hue Jackson made the change to from Tyrod Taylor to Mayfield after his stellar performance against the New York Jets on Sunday.

The Brown’s 21-17 come-behind win against the Jets was the team’s first win since 2016. Mayfield came into the game for an injured Taylor and showed a lot of promise in his NFL debut.

Mayfield completed 17 of 23 passes for 201 yards and pulled the Browns out of their 14-0 deficit in the second half.

Jackson said Mayfield “nailed” his performance on Thursday and checked every box for him.

“This is sooner than when I thought it would happen because I thought we would play much better, you know, earlier on offense, we didn’t. There was a stark difference in how we performed when he got in there,” Jackson said. “That’s the nature of this business. That’s the way it works. It’s an earned business. The young man went in there and he earned a right to be the starter.”

What happens to Tyrod Taylor?

Taylor remained in the NFL concussion protocol on Monday. Jackson was hopeful he would be cleared for Sunday, but said the move to Mayfield would not be for just one game. He also added the Browns are not interested in trading Taylor at this time.

Instead, Mayfield is the man for the job, but the young rookie says this doesn’t change anything for him.

“You know, I’m gonna carry my same routine, so far thats working for me. I got guys around me that I can lean on for support,” Mayfield said. “Now the only thing different would be the vocal standpoint of leadership. We still got Tyrod, he’s still one of our captains, one of our best leaders, there’s no doubt about that, but now I just need to be more vocal. It just comes with the position.”

Courtney Mims is a junior telecommunications major at the University of Florida. She enjoys covering all Gator sports and drinking gallons of Starbucks coffee while doing so.
Previous Garoppolo Out for the Season With Torn ACL
Next Fitzpatrick vs Winston: Who will be on the field?