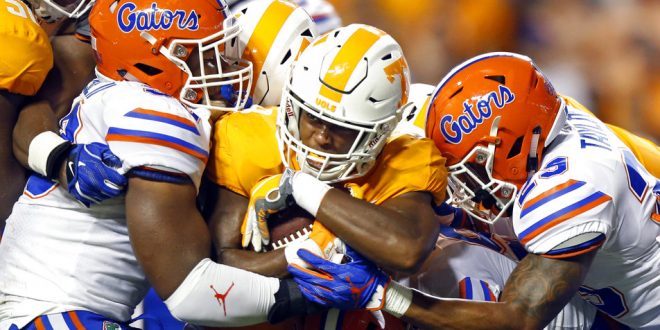 David Reese: “It felt good to be back.”

Linebacker, David Reese, made his awaited return to the Florida Gator defense on Saturday.

Reese missed the first three games due to an ankle injury that occurred during spring practices. Though Reese felt his ankle wasn’t fully healed, he said the energy and noise from the fans helped him not think about it.

He came back to the game in full swing getting a tackle on Tennessee’s first play of the game. Five plays after, Reese broke through Tennessee’s defensive line on a delayed blitz but instead recovered a fumble after defensive end Jachai Polite beat him to the blitz.

Reese ended the game with a team-high of 11 tackles.

BALL IS OUT!!! David Reese grabs it and the #Gators have the ball at the Vols’ 21! pic.twitter.com/hHe94GL6zx

Back with the Boys

During his time off, Reese felt he had time to reflect on his leadership and the position that he was in and help the younger players step up.

“They did a great job, James Houston, Ventrell Miller, those guys, Lacedrick Brunson, are all coming along great,” said Reese, “Then you have players like Rayshad (Jackson) that can play anywhere and he’s a great linebacker.”

How the Gators will Prepare for Mississippi State

The Gators are on the road again this week heading to Starkville for the first time since 2009 to play Mississippi State, where head coach, Dan Mullen, called home for the last 9 years.

The Gators intend not to let up on the gas from the Tennessee game.

Reese said this weeks practice will be a hard one.

The Gators will play No.23 Mississippi State on Saturday Sept. 29 at 6 pm.