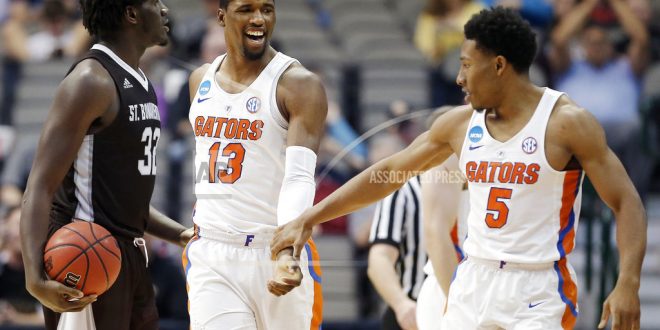 Florida Gator Basketball is Back

Even though we are smack in the middle of college football season, it was Media Day on Tuesday for both Gator basketball programs.  The Gator men’s basketball team has high expectations heading into the regular season. They are returning 10 of their 12 impact players from 2017-18 and bring in a highly-touted recruiting class (18th nationally via ESPN). Coach Mike White is heading into his fourth campaign as the Gator head coach, with an overall record of 69-37, including two straight trips to the NCAA Tournament.

Even though the Gators lost Chris Chiozza and Egor Koulechov, two of their top four players from last season, they still return a ton of talent. Senior small forward Jalen Hudson led the team in scoring with 15.5 points per game. KeVaughn Allen (11.0 ppg) and Keith Stone (8.8 ppg) will look to assist Hudson by taking on a larger role in the offense. Mike Okauru and Deaundrae Ballard had solid freshman campaigns and are in line for increased minutes and opportunities.

The one major issue for the Gators last season was their frontcourt depth. Gorjok Gak was hampered by an injured knee. Chase Johnson (concussions) and Isaiah Stokes (knee) missed the entire season with their respective injuries. Kevarrius Hayes and Dontay Bassett were forced to play major minutes that undoubtedly wore them down by the end of the year.

This lack of frontcourt depth certainly won’t be an issue this year. Gak, Johnson and Stokes are 100% healthy and Hayes, Stone and Bassett all have another year of experience under their belts.

White will also have the ability to experiment with many different types of lineups. Stone, Stokes and Johnson can all spread the floor and drain threes. This will give more opportunities for the likes of Andrew Nembhard, Allen, Hudson and Okauru to get to the rim with relative ease. If White wants to get physical and bang bodies down low, he’ll throw in Hayes, Gak, Bassett or Stokes. Unless the Gators get plagued by injuries, White will be able to pick his poison in the frontcourt.

White has done a fantastic job of improving his recruiting classes each year in Gainesville. He reeled in his first ever five-star prospect in point guard Andrew Nembhard, and rounded out his class with two elite four-star players in Noah Locke and Keyontae Johnson.

Ever since Nembhard arrived on campus, everyone has been raving about his potential. The 6’5″ 190-pound guard from Ontario, Canada is considered one of the best passers in his recruiting class. He led Canada to a silver medal at the 2018 FIBA U18 Americas while averaging 15.7 points and 8.8 assists per game. He is known for his high IQ and playmaking ability. Mike White and numerous teammates offered a lot of praise for the young floor general.

Noah Locke and Keyontae Johnson also have the ability to make a sizable impact during their freshman year.

Locke is best known for his deadly shooting, specifically from beyond the arc.

Keyontae Johnson is an elite athlete with a knack for finishing around the rim. The 6’5″ 225 pound small forward can easily guard power forwards, which gives White the ability to insert smaller lineups. To put into perspective of how elite of an athlete Johnson is, his vertical leap of 41.5″ would have ranked 3rd in the 2018 NBA combine. Johnson is also a solid shooter and is known for his rim-rattling dunks; his athleticism alone should give him the opportunity to see decent minutes right out of the gate.

White also commended Johnson’s abilities, but said his one issue up to this point is getting his motor going on a consistent basis.

White made it clear that “all three of our freshman will play.”

The Gators will not have any easy stretches throughout the season. The SEC is stronger than it has been in decades, with Kentucky and Tennessee looking like legitimate national title contenders. The SEC is also arguably deeper than it was last year, which is crazy to think about considering eight teams made the NCAA Tournament.

White mentioned how deep the SEC is going to be this season.

The Gators also have one of the hardest out of conference schedules in the nation. They play Florida State, Oklahoma, West Virginia, Michigan State and Butler. The Gators also have the possibility of playing Stanford, Wisconsin and Virginia, contingent on results in the Battle 4 Atlantis. This brutal out of conference schedule could come back to haunt the Gators or significantly prepare them for the SEC and NCAA Tournaments.

White discussed the difficulty of the Gators’ non-conference schedule.

As long as their key players stay healthy, the sky is the limit for this team. They have bonafide scorers, a few elite playmakers and an abundance of bigs who all have different strengths. If Mike White is able to find the right combinations and get his team playing the right way, making another NCAA Tournament appearance could be in the cards.