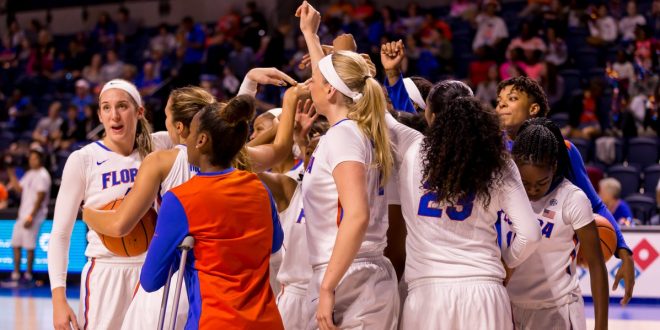 The University of Florida women’s basketball team is just over one month away from their first game of the season. The Gators will kick things off at home against Gardner-Webb on Nov. 6. Five days later, the Gators will travel to Tallahassee to face in-state rivals Florida State.

Florida struggled immensely last season. The Gators finished second-to-last in the SEC, followed only by Ole Miss. They finished with an overall record of 11-19, with a 3-13 record in SEC play.

The Gators were plagued by losing streaks, including stretches of five and six consecutive losses on separate occasions. Their season ended in the first round of the SEC Tournament with a loss to Ole Miss.

Seniors Dyandria Anderson, Paulina Hersler and Haley Lorenzen all graduated after last season. The three players finished with the following career stats, according to floridagators.com:

Looking Ahead and for a Leader

With the void of leadership after the departure of last year’s seniors, Coach Newbauer has given redshirt senior guard Funda Nakkasoglu the task of leading the team.

“I’m merely going to focus on leadership,” said Nakkasoglu. “I know my coaches, because it’s my senior year, want me to be a leader on the court and off the court.”

Along with leadership from the older players, freshman forward Kristina Moore said everyone should contribute in leading the team to success.

Adjusting to Life in Gainesville

Moore and the other new faces have been adjusting to the team and life overall in Gainesville. For Moore, it’s been especially different coming from Australia. However, with fellow Australian Nakkasoglu on the team, it’s been a smoother transition than it may have been otherwise.

Getting used to Newbauer’s Demands

Nakkasoglu has noticed the improvements the new players have made so far under Newbauer.

“They’ve gotten used to the way he coaches and his style during the offseason,” Nakkasoglu said. “It’s just taking what he says on board and trying to do it to the best of their ability.”

Staples recently recovered from a long-term ACL injury and is now fully fit. She is now looking to improve her game in several aspects this season.

The Gator’s schedule begins with Gardner-Webb on Nov. 6 in the O’Connell Center. Until then, the team will continue to progress in practice.