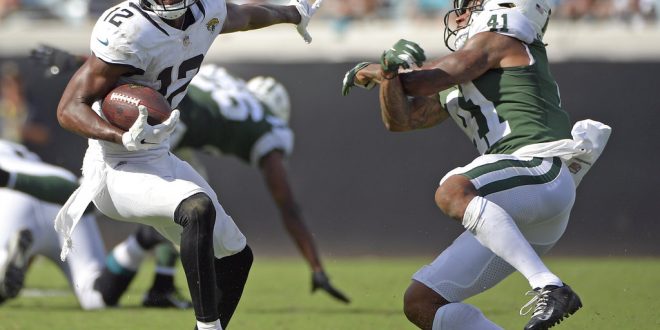 The Jacksonville Jaguars are back in the win column after defeating the New York Jets 31-12 on Sunday. Jacksonville had 503 total yards of offense against New York, improving from a tough 9-6 loss versus the Tennessee Titans that lacked execution. Blake Bortles, who completed 29 passes for 388 yards and two touchdowns, passed David Garrard (1,406) to move into second in the franchise’s all-time completions list.

Onto the next quarter of the season. pic.twitter.com/r93V6bPl7g

The Jags began the game with a 15-play drive that resulted in a Josh Lambo 32-yard field goal. The Jets would go three and out, leading to another Jacksonville drive beginning in the first quarter and ending in the second with another Lambo field goal. Running back Leonard Fournette left the game with hamstring tightness, leaving Bortles to carry the offense.

Bortles managed to throw 11 straight completions before an incomplete pass to tight end James O’Shaughnessy. Bortles said in his post game interview that his goal was to improve offensively after last week.

Additionally, running back T.J. Yeldon came in and had a big game, catching a short pass up the middle that resulted in a 31-yard touchdown. Lambo would come up clutch once again, hitting a 54-yard field goal with 34 seconds left in the half. Lambo remains perfect at TIAA Bank Stadium (18 of 18) and has made 19 consecutive field goals.

On the other hand, the Jets were unable to spark any success on offense or defense. New York ended the first half with only 86 yards compared to the Jags 270. Furthermore, the Jets failed to force a punt from the Jags offense. New York, however, punted three times. The trend continued as rookie quarterback Sam Darnold only completed 17 of his 34 passes and was sacked three times. Jacksonville led 18-0 after a safety before Jets kicker Jason Myers 27-yard field goal to put New York on the board.

Although the Jags gave up three turnovers, the Duval County team solidified a comfortable lead following a 67-yard touchdown pass from Bortles to wide receiver Donte Moncrief. The Jets began a rally attempt with a fumble recovery that resulted in a touchdown pass from Darnold to Jordan Leggett, but New York’s two-point conversion attempt failed.

Yeldon would impact the game once again, completing the final drive of the game with a one-yard touchdown run to seal the deal in Jacksonville. Despite the win, Jaguars Head Coach Doug Marrone said that turnovers and penalties will cost them in the long run.

@sophialafrance
Previous Florida Gators Football Recap: Mullen and Defense Assert Themselves in Starkville For Big Win
Next Jaguars Take Down Jets, Improve to 3-1