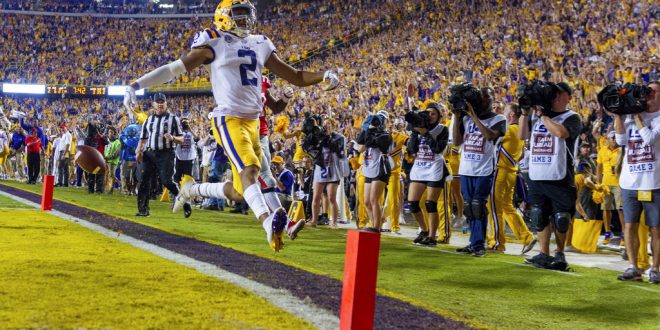 The Florida Gators will host the LSU Tigers in an SEC matchup this Saturday at Ben Hill Griffin Stadium in Gainesville, FL. Kickoff is set for 3:30 p.m. and coverage of the game will be on CBS.

This season, starting off in Dallas against Miami and similarily against Auburn, the Tigers were inconsistent throughout the games. In Moreau’s words, “Every game LSU went into a lull.” In most games, the Tigers go through a lull into which the offense shuts down. This puts LSU’s defense in a tough situation, in which they have to just hold the opposing team.

Moreau explains the type of slump the Tigers go through and how long it normally lasts:

The Gators will be hoping this lull will remain consistent against them on Saturday.

The last time LSU faced Dan Mullen was last season against Mississippi State, in which the Bulldogs demolished the Tigers defeating them 37-7. Mississippi State quarterback Nick Fitzgerald threw for 2 touchdowns and 180 yards, and the Bulldogs run game kept LSU off and unbalanced throughout the game.

According to Moreau, it was during this game that LSU decided they wanted to be a good team.

During this game, LSU also faced Todd Grantham’s defense as he was a defensive coordinator for the Bulldogs at the time. Therefore, they know the type of defense they are going up against this weekend.

Moreau noted that LSU doesn’t have a star running back like Leonard Fournette. However, the Tigers have running backs Nick Brossette and Clyde Edwards-Helaire. Both running backs are average SEC backs but are continuing to get better as the season goes on.

Moreau mentioned that despite the lack of running backs, LSU can make up for this offensively with the wide receivers. Moreau said LSU has 6 to 7 receivers that have improved a lot throughout the past few games. Coming from high school into the SEC, the players go through a big change and are now starting to emerge.

However, one major key for the offense is quarterback Joe Burrow. Burrow is a positive aspect of the LSU offense. Moreau believes he does a great job at leading the team.

Overall, Moreau believes that LSU should win, but thinks it’ll be a very close game.

However, according to ESPN’s Football Power Index, the Florida Gators are expected to win by 58.4 percent.

Sydney is a senior studying telecommunications with a specialization in sports media at the University of Florida. She is a multimedia sports reporter for ESPN 98.1 FM/850 AM WRUF and WUFT-TV.
Previous Managers: Who’s here to stay? Who’s already gone? — MLB Hot Seat Edition
Next Dodgers Ready to Use Playoff Experience Against Youthful Braves