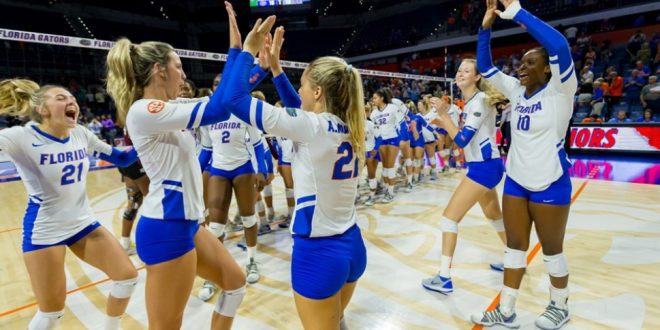 No. 11 Gator Volleyball Pushed to Brink at Home

The Florida volleyball team was pushed as far it could be on Friday night.

The 11th ranked Gators toughed out a gritty win in a five-set match against the Texas A&M Aggies. They are now 5-0 in the conference for the 22nd time under Mary Wise.

A five-point service run helped the Gators start out the match with a 5-0 advantage.  They would stretch it to 17-5, but a couple of runs by the Aggies would narrow the gap to 22-16.

Kills by Mia Sokolowski and Paige Hammons coupled with an A&M service error closed Set 1 for the Gators 25-18. Florida hit out of its mind recording a .600 percentage as a team.

Set 2 proved more difficult for Florida. They were cooled off to .238 hitting clip and didn’t escape to more than a three-point lead for their first 13 points.  It would remain tight until a kill tucked into the back corner by Paige Hammons gave them Set 2, 25-22.

The Gators would drop Set 3, 25-21. Both teams deadlocked at 15, but the Aggies would pull away thanks to four kills by Hollann Hans. Set 4 would have the same result backed by seven kills by Hans.

The Gators jumped out 10-5 in the fifth set, but A&M would not go away lightly. They fought back and narrowed the deficit 11-10.  Florida and Texas A&M kept it close all the way until Hammons tucked the ball into the back left corner to seal the victory for Florida.

Florida coach Mary Wise had nothing but praise for the Aggies squad that tested the limits for her young team. She was extremely impressed in the play of Aggies junior outside hitter Hollann Hans.

She said Hans’s whopping 32 kills and 34 total points was  “one of the all-time best performances in the O’Connell Center.”  Wise added the team knew the ball was going to go to her and she still had a great night.  “Not too many players have come in here and gotten 30-plus kills,” Wise said. “A ton of credit to Hollann. It wasn’t like we didn’t know the ball was going to her. She really played well.”

Some of Florida’s players credited Texas A&M as well.

“Props to Texas A&M – they served us great and they defended really well tonight,” Hammons said. “Holland Hans is a fantastic player and she really got us tonight.”

Carlton led the way with 17.5 points on the match with 14 kills and seven block assists. Wise said Monserez’s leadership helped the Gators and Gregory defensively solidified them.

“That was a highly competitive match and it was our first time going to five sets in conference,” Carlton said. “It was our first five-set win this season, which is a great feeling. Texas A&M played a great scrappy game and did some really great things tonight.”

Hammons said the last three sets showcased what happens when the Gators don’t serve aggressively versus when they do.  She said it’s great the team is becoming better in the fifth set seeing as they dropped none during 2017 and lost their first two to begin this season.  Carlton said a back-and-forth match like Friday night is something a team wants, adding they don’t want teams to just “roll over and die.”

“We had the analogy of a jungle tiger or a zoo tiger and which one are you going to be,” Carlton said. “One who’s passive or one who is out to hunt for predators? Tonight, Shannon (Wells) on the bench was like ‘What kind of tiger are we going to be tonight?'”

In the end, the Gators roared just a little louder than Texas A&M.