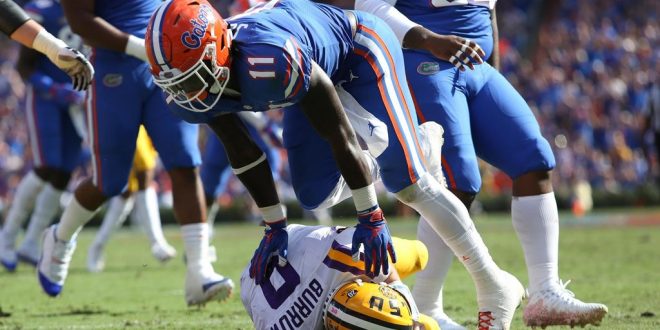 The junior out of Miami has often been criticized throughout his career for leaving his gap in pursuit of the ball.

Against LSU, that was not the case at all.

Instead, he flew around, creating havoc against the Tigers’ offense. This season, Joseph is the Gators’ leading tackler with 42, including 6.5 for losses. He has also managed three sacks, two pass breakups, one quarterback hurry and a fumble recovery.

Posted the first multi-sack game of his career in @GatorsFB's win over LSU.@gloryboy_Sean is the #SECFB Defensive Player of the Week. pic.twitter.com/L9KcDt4lKD

Head Coach Dan Mullen spoke highly of his junior linebacker on Monday at his press conference:

“I think what you’re starting to see is a guy that understands, ‘Hey, don’t lose how hard I play, don’t lose the speed I play with or the reckless abandon I play with out there on the field. But, I also have to understand I need to be in the right place at the right time and execute as well because if I just run around out of control, you’ll see big play after big play after big play hitting us,'” Mullen said.

Looking back through last night's #Gators highlights against LSU, continue to be impressed with Vosean Joseph (@gloryboy_Sean ). Stand out player on defense, with his best game of the season by far (14 tackles, 2 sacks).

Here's 60 seconds of some of his best plays from yesterday pic.twitter.com/EwKz9gLymi

Defensive coordinator Todd Grantham shared his thoughts on Monday as well, as to why he thought Joseph had so much success on Saturday: “I think it’s more of a comfort level, understanding what he needs to do in the defense,” Grantham said. “The guy’s really fast, he’s really a conscientious guy as far as wanting to perfect his craft and be a very good player at his position.”

I had to do it coach @CoachDanMullen https://t.co/CAevffdDGW

In UF’s 2008 matchup with LSU, Gator linebacker Brandon Spikes took an interception to the house, punting the ball into the south end zone stands. The moment is one that’s remembered by many who watched the game that day. When Joseph saw the video on Twitter, he knew he had to reenact it.

Before the game, he wasn’t sure if he’d actually get the opportunity. That’s why when Brad Stewart’s pick-six ended up in the south end zone, he knew he had to kick it. Luckily for him, the 15-yard penalty that resulted from it didn’t hurt the team.