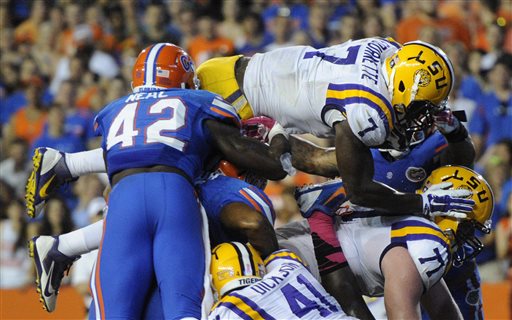 FILE - In this Oct. 11, 2014, file photo, LSU running back Leonard Fournette (7) dives over the Florida defense for a 2-yard touchdown during the second half of an NCAA college football game in Gainesville, Fla. It might be the matchup of the season: LSU running back Leonard Fournette, perhaps the nation's best player vs. Florida's vaunted defense. The No. 6 Tigers and No. 8 Gators meet in prime time Saturday in a game between unbeaten teams. (AP Photo/Phil Sandlin, File)

Coming off big win, Florida linebacker David Reese says they will not sleep on Vanderbilt

The Gators energy is high after defeating the fifth ranked LSU Tigers this past Saturday. David Reese, Florida linebacker, says they only have 24 hours of celebration before its back to work. He mentioned the philosophy of restraining the rope that Coach Mullen has been urging the team to act by. Whenever the game seems to be slipping away, to find a way to rejuvenate and retaliate.

Reese said they have to focus on the next game as Vanderbilt is not a team they can take lightly. He said, “they just got out of a dog fight with Georgia, and they are a team who doesn’t make mistakes.”

He said the Commodores are a good defensive team. They also have a veteran quarterback who controls the game along with an experienced offensive line. But he said the game will not be nothing the Gators can’t handle.

When asked how the Gators will handle the smaller atmosphere after playing in front of sellout crowds, Reese said the game will not be about their stadium capacity, but it will be about the energy they bring to the Commodores stadium.

Reese said its no surprise he has been playing the way he has played.

“I always knew what he could do, even during his first year, Reese said. “We had a veteran defensive line, but now its his time to come up.”

On keeping energy up

Reese said the Gator’s confidence will come from how hard they work in practice and how well they prepare.

Kevin Smalls is a fourth year journalism student on the sports and media track from Jacksonville, Florida. He aspires to be a sports writer on the high school and collegiate level. He is currently taking courses at the University of Florida in the sports writing field to learn what it takes to be a sports writer. He writes web stories for ESPN Gainesville. He also informs the public of local, state, and national on sports trending for ESPN Gainesville.
Previous Jacksonville Jaguars hit by injuries
Next Gators LB Joseph impressive against LSU, named SEC Defensive Player of the Week