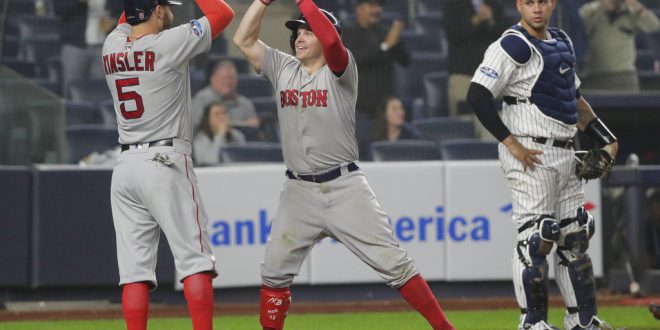 The Yankees and the Red Sox head to Game 4

Three teams have already moved on and punched their tickets to their respective divisions’ championship series. However, the Yankees and the Red Sox still leave us waiting in anticipation of their Game 4.

As the series shifted to New York on Monday, it seemed like the Yankees certainly had the momentum after stealing a game in Boston and tying the series at one a piece. Unfortunately for New York, Boston quickly ended the Yankee momentum on Monday and took Game 3 from the Yankees by a brutal score of 16-1.

The Red Sox jumped out to an early 1-0 lead in the top half of the second inning, but that was just the beginning. Boston added two more runs in the third frame and then really turned it on in the fourth. The Sox had a seven-run fourth inning to put them out in front of the Yankees by a score of 10-0 before they’d even made it halfway through the game. You wouldn’t have been wrong in assuming the game was pretty much over at that point, but with no mercy rule in baseball, it just got uglier.

The Yankees were only able to put up one single run throughout the entire game. Nonetheless, Boston didn’t seem to think ten runs was enough and added six more before the game ended, well… just because they could. The 16-1 loss to their arch-rival was the worst postseason loss in franchise history for New York.

Score speaks for itself.

Between the two teams, they won 209 regular season games combined. So, needless to say, they’re both pretty good. However, the Yankees looked quite bad in Game 3.

The Sox racked up a total of 18 hits in Monday nights game, compared to only five hits by the Yankees. New York can only hope that their foes used all of their hits in Game 3 if they want to win in Game 4.

The Yankees have a lot of work to do in Game 4, and it all starts with their veteran, lefty starter, CC Sabathia. Sabathia is 38 years old and has been in the league for nearly 20 years. The Red Sox have shown that they do not hit as well off of a lefthanded pitcher as opposed to a righthanded one. This has the potential to be exactly what the Yankees need in order to cool down the hot bats of Boston.

However, the Red Sox will be starting Rick Porcello in Game 4. In four starts against the Yankees, Porcello was 2-0 this season with a 2.31 ERA.

The Yankees have their backs against the wall right now, but that’s an all too common narrative for this team. The Yankees have played and won two consecutive AL Wild Card Games. They recovered from a 0-2 deficit to the Indians in last year’s ALDS. And THEN, they won three straight at home last year against the Astros in the American League Championship Series before falling in Games 6 and 7 at Houston.

Game 4 takes place in New York on an October night; a time and place where postseason baseball was practically meant to be played. So much postseason history lives in Yankee stadium, as well as, between these two teams. I wouldn’t expect anything less than extraordinary out of Game 4 in the Bronx.