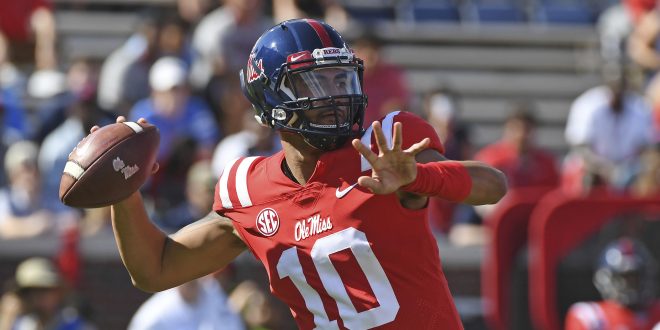 The Arkansas Razorbacks (1-5, 0-3 SEC) are desperate for a victory to put an end to a five-game skid as they take on the Ole Miss Rebels Saturday at 6:30 p.m. in Little Rock, Arkansas. Ole Miss (4-2, 0-2 SEC) has found plenty of success this season, besides dropping two games to top-five opponents in No. 1 Alabama and then-No. 5 LSU. But both teams have yet to pick up a conference win this season.

Alabama quarterback Tua Tagovailoa carved up the Razorbacks’ passing game last week. The sophomore finished 10 for 13 with 334 pass yards and four touchdowns before being replaced by Jalen Hurts in the third quarter of the Tide’s 65-31 win in Fayetteville.

Razorbacks coach Chad Morris said his team needed to play mistake free to have success against Alabama, and they were unable to do that.

The Razorbacks’ defense has struggled for much of the season, surrendering 201 points during its five-game losing streak.

On the other side, Ole Miss has also had its share of struggles on defense. The Rebels rank last in the conference in both rushing defense and passing defense. And they’ve given up at least 400 yards of total offense in four of their last five games.

The Rebels are also depleted at the defensive back position. But Ole Miss coach Matt Luke said he’s pleased with the effort he’s seen from his team, despite his secondary being riddled with injury.

Ole Miss won’t prove to be an easy opponent for the Razorbacks, though. The Rebels enter the game with the No. 1 overall offense in the SEC with the SEC’s leading passer in quarterback Jordan Ta’amu (1,911 yards) and the leading receiver in A.J. Brown (586 yards).

Ole Miss needed a morale boost after suffering disappointing losses to Alabama and LSU. The Rebels found it in last week’s game. Ta’amu accounted for five touchdowns in the Rebels’ 70-21 thrashing of Louisiana Monroe.

Ta’amu could potentially expose the Razorback’s pass rush with his ability to spread the ball out. He found three different receivers for scores last week, hitting Brown, D.K. Metcalf and DaMarkus Lodge.

Running back Scottie Phillips has emerged as a weapon for the team with his quickness. He leads the SEC in scoring with ten touchdowns on the season and is third in rushing yards (637).

And Luke said Phillips has stepped up big for the team this season.

Despite its record, Arkansas holds a 36-28 advantage in the all-time series. And the Razorbacks have come out victorious in the teams’ last four meetings.