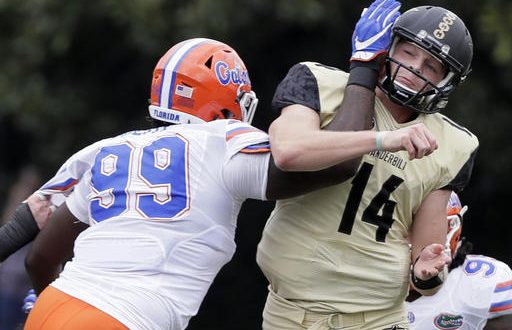 Key Points for Florida Heading into Game Against Vanderbilt

Coming down from the thrill of their victory over LSU, the Gators travel to Nashville to face Vanderbilt. The Commodores sit at the bottom of the SEC at 0-2 in conference play and 3-3 overall.

Last year, Florida defeated Vanderbilt by 14. The game was a split effort by both QBs Feleipe Franks and Luke Del Rio, but their scoring plays came primarily from runs by Malik Davis and Lamical Perine.

If Florida wants a chance to hold the title of “DBU” they will need to defend it against one of the best QB-WR combinations in college football. Quarterback Kyle Shurmur, a fourth-year starter for Vanderbilt has thrown 45 completions for 496 yards and 6 touchdowns all to one player: Kalija Lipscomb. Lipscomb is a third-year player and potential future NFL draft pick.

Don’t Let the Record Fool You

Vanderbilt was handed one of the toughest schedules to open the year. They held their own against No. 5 Notre Dame. After a weak first half that concluded with a fumble on the goal line, they clawed back in the second half only to fall just short 22-17.

This was followed by a tough loss to South Carolina, and then a blowout defeat from the No. 2 Georgia Bulldogs last week. Granted, their non-conference games have been cakewalks, but they follow them up by playing major powerhouse schools.

While last week’s LSU victory put them in the highest position they’ve been for quite a long time, they aren’t through yet. The Kentucky loss continues to look worse for the Gators as the Wildcats keep losing, so Florida will need to do more to prove that the loss was just a fluke. They can’t afford to drop another questionable game.

Josh Hammond spoke about the need for continued improvement:

There is clearly still room for improvement on this Florida offense, but they have made major strides already from the beginning of the season. The pressure still remains to establish a stronger passing game, but the cutback on turnovers is an improvement in itself. Mullen has been drawing up the right plays to set up an open receiver, even an open shot at the end zone several times a game. The goal now is to waste fewer opportunities. There will always be mistakes on the football field, all these Gators can do is try to limit them as much as possible.