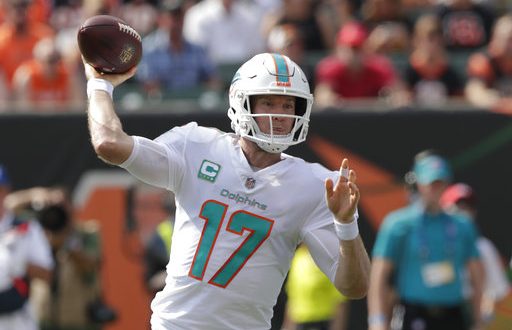 Miami Dolphins are Anxious for Another Win

The Miami Dolphins host the Chicago Bears Sunday at Hard Rock Stadium. The Dolphins will look to turn things around after losing two straight games, especially coming off a 27-17 loss against the Bengals. The Bears, on the other hand, are on a three-game winning streak and will try to make it four on Sunday.

Offense focusing on consistency ahead of #CHIvsMIA.

One thing the Dolphins are looking for is more consistency from every group on the offense. Quarterback Ryan Tannehill has completed about 66 percent of his passes, but many turnovers this year has certainly hurt the Dolphins.

Here Tannehill talks about Mack’s presence and facing off against him this week:

The Dolphins defense hasn’t been that much more impressive than the offense. Giving up nearly 400 yards of total offense, they will need to contain the Bears who scored 48 points in their last game against the Buccaneers.

The Chicago Bears are coming off of a bye week last week and will turn their focus to the Dolphins.

The bears are eyeing in on few matchups this week which could help them beat the Dolphins. One being their key addition this offseason, Khalil Mack lined up against Dolphins RT Ju’Wuan James. The Bears have averaged 27.8 points a game this season and look for another big game from quarterback Mitch Trubisky.

Trubisky is coming off of a 6 touchdown game and here he talks about facing the Dolphin defense:

Both teams will come in with three wins, doing their best to earn the fourth. Kickoff is set for Sunday at 1 p.m. ET on FOX.