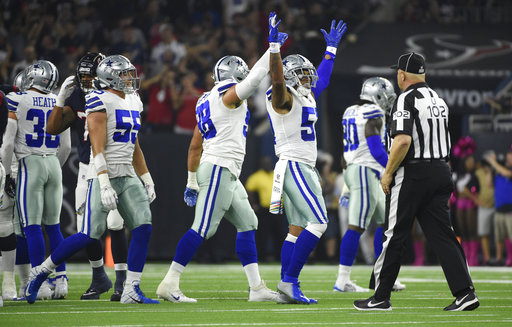 The Jacksonville Jaguars prepare to face the Dallas Cowboys this weekend at the AT&T Stadium. Both teams have a lot of improvements to make as they head into the rest of their regular season play.

Everything is awesome when you're wearing black and teal.

We'll be wearing black tops, teal pants against the Cowboys on Sunday. pic.twitter.com/JwLZnRpxid

Last week was rough for the Jaguars. They lost 30-14 to the Kansas City Chiefs, dropping a lot of potential points because of errors made on the field. Despite Jacksonville having 29 first downs compared to Kansas City’s 26 first downs, Jaguars quarterback Blake Bortles had one TD and four interceptions, with the Chief’s defense picking off one and bringing it back for a touchdown. Bortles did collect the most yards in this game, going 33 of 61 for 430 yards.

“We’re 3-2 but minus seven, which is really tough to do, be 3-2 and be minus seven in the turnover ratio,” he said. “It’s a trend that I talked about with the team today. If we don’t change that, we’re going to be in trouble. We have to change that.”

Cowboys Have Work to Do

Dallas is off to a rough start this year. With a 2-3 record, they are ranked 30th in the league for passing yards (172.0) and average points scored in a game (16.6). However, Cowboys running back Ezekiel Elliot leads the NFL in rushing yards, with 480 yards so far. Unfortunately, Elliot’s efforts were not enough in their last game against the Houston Texans, he only had 54 yards for 20 carries, an average of 2.7 yards per carry. Quarterback Dak Prescott had 208 passing yards and a touchdown but threw two interceptions for the Cowboys; they fell short losing 19-16 in overtime. Prescott and Elliot will both have to step up if they want to give Dallas a win at home this week.

The ESPN Football Power Index predicts that the Cowboys have a 56.1% chance of beating the Jaguars.

Watch the Jacksonville Jaguars play the Dallas Cowboys in the AT&T Stadium on Oct. 14 at 4:25 p.m.  The game will be shown on CBS.

3rd-year Telecommunications student at the University of Florida. Also a member of the Women's Track and Field team.
Previous NLCS Preview: Brewers Set to Host the Dodgers
Next Miami Dolphins are Anxious for Another Win