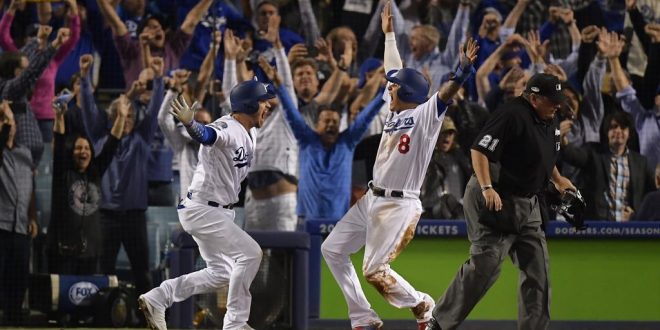 Los Angeles Dodgers' Manny Machado reacts after scoring on a Cody Bellinger walk-off hit during the 13th inning of Game 4 of the National League Championship Series baseball game against the Milwaukee Brewers Tuesday, Oct. 16, 2018, in Los Angeles. The Dodgers won 2-1 to tie the series at 2-2.(AP Photo/Mark J. Terrill)

In a game that went into the wee hours of the night, the Los Angeles Dodgers defeated the Milwaukee Brewers 2-1 to tie the National League Championship Series at two games a piece.

Cody Bellinger singled to right field in the 13th inning with one out, bringing in Manny Machado to win the ballgame. The game lasted five hours as the teams combined for 15 hits.

WALK IT OFF DODGERS!

Cody Bellinger drives in Manny Machado in the 13th inning as the Dodgers tie the NLCS 2-2. pic.twitter.com/bAICtRIIen

The biggest trend of the series so far has been the excellent pitching showcased by both sides.

No team has scored more than four runs since game one. In game three, Dodgers starter Rich Hill was solid as he went five innings, only giving up one run. The Dodgers bullpen could not have been better last night as they threw eight scoreless innings in a must-win game for LA. Manager Dave Roberts was not afraid to use his arms in the bullpen as he used eight different pitchers in relief.

Known for his on the field tactics, Machado once again found himself in hot water as the benches cleared in the 11th inning after he hit Brewers first basemen Jesus Aguilar’s foot as he ran out a groundout.

ICYMI: Things got heated between Manny Machado and Jesús Aguilar late in Game 4 of the NLCS. pic.twitter.com/jz6HwCMaYw

Nothing came out of the teams clearing the dugouts but NL MVP candidate Christian Yelich did have some choice words for the Dodgers all-star.

“It’s a dirty play by a dirty player,” Yelich said. “I have a lot of respect for him as a player, but you can’t respect someone who plays the game like that.”

After the game was over, Machado squashed any problems with Aguilar saying that the two go way back and that there was no ill intent. Milwaukee manager Graig Counsell noted in his press conference that Machado has stated that he doesn’t always run plays out but somehow got tangled up with Aguilar at first.

It will be interesting to see if the Brewers eventually respond to what Machado did.

I mean, Manny Machado very clearly clipped Jesus Aguilar on purpose. He’s gonna wear one for that when the Brewers see the replay and then he’ll complain about getting thrown at like he always does, even though he initiates every feud he’s ever been involved in.

Looking Ahead to Game 5

One doesn’t have to look too far for game five as the NLCS resumes Wednesday at 5:05 p.m. in Dodger Stadium.

Wade Miley takes the mound for the Brewers on three days rest while Clayton Kershaw who is also on short rest will be on the hill for Los Angeles.