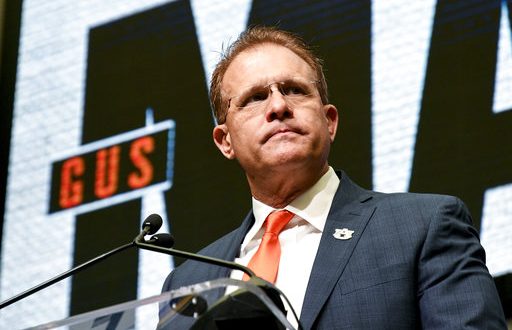 Auburn will travel to Vaught-Hemingway Stadium this Saturday to play the Rebels. The game is at noon, and can be watched on ESPN.

This has been an underwhelming year for Auburn, to say the least. They are coming off of a rough loss to Tennessee. Auburn played a good game, gathering 448 yards on offense and holding the Volunteers to less than 2 yards per rush. However, a few key mistakes ruined their chances. Three turnovers, a missed field goal, and a few long pass plays by Tennessee QB Jarrett Guarantano sealed their fate. Auburn head coach Gus Malzahn was not satisfied with his teams execution is these moments.

The Tigers have two other losses this year: a one-point loss to LSU and a 23-9 loss Mississippi State two weeks ago, leaving Auburn on a current two-game losing streak. QB Jarrett Stidham tried to keep a positive outlook following the loss to Tennessee:

Naturally, when a team starts to under perform, talk begins to surface about a possible coaching change. Although Malzahn just recently signed a seven-year contract extension, a buyout wouldn’t be out of the question.

"I'm not ruling out a change at the end of the season even though he (Malzahn) has a contract that has at least 38 million dollars in buyout money…from what I've been told, there's not much concern there when it comes to the money" – @bmarcello pic.twitter.com/jjhYUemqxz

The next few games could play a factor in whether or not Malzahn keeps his job in the future, starting with Ole Miss.

Regardless of how difficult the season has been for them thus far, they still must tie up the cleats and keep playing. Ole Miss is a tough opponent.

They had the misfortune of playing Alabama and getting dominated, but only have one other loss on the year to LSU. Senior QB Jordan Ta’amu has led the team with both his arm and legs. In last week’s victory over Arkansas, he threw for 287 yards with two touchdowns and ran for 141 yards with a rushing touchdown. Malzahn understands this heading into Saturday’s matchup.

Ole Miss could sneak into the top 25 by the end of the season if they win out against Auburn, No. 17 Texas A&M, and No. 22 Mississippi State. Of course the Rebels cannot become bowl eligible regardless of how well they play because of sanctions as a result of recruiting violations.

Despite this, it is still fun to watch them try to play the role of spoiler as the season winds down.

Previous Bucs look to get back on track vs. Browns
Next What Florida Gators football players are doing during the bye week