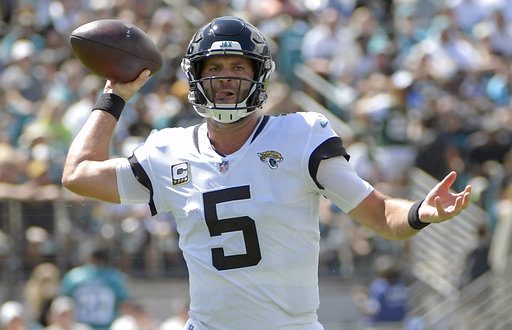 Jacksonville Jaguars Try To Get Back On Track Against The Texans

Following two straight losses, the Jacksonville Jaguars take on their division rival the Houston Texans on Sunday at 1 p.m. in TIAA Bank Field.

The Jaguars are coming off back-to-back road losses against the Chiefs and Cowboys with the result being that Jacksonville now sits next to last in turnover margins, with a -9 ratio.

Quarterback Blake Bortles has struggled with consistency this season.

“We’re definitely not helping ourselves out by any means, but we’re also not getting any bounces right now and that is part of it,” Bortles said.

Against the Cowboys, he was 15-of-26 for 149 yards with one touchdown and one interception.

Texans receiver DeAndre Hopkins and Jaguars cornerback Jalen Ramsey will be a marquee matchup in the AFC South clash.

“It’s always been a good matchup since Jalen has been in the league. He’s a great player,” said Texans head coach Bill O’Brien on Wednesday. “He has all the qualities that you look for in a great corner. He’s got good length, he’s competitive, he has good ball skills, he can run. Hopkins is a great receiver, so it’s a big part of the game.”

Hopkins has 44 receptions for 657 yards and three touchdown. Ramsey has 21 tackles and two passes.

Texans safety Andre Hal, was back in practice this week after being diagnosed with Hodgkin’s lymphoma and being in remission.

Hal, who was on the Active/Non-Football Illness list, could be activated and play against the Jaguars on Sunday.

The AFC South matchup will be broadcasted on CBS at 1 p.m. Sunday.

@_lmcarrr
Previous Gator Volleyball Faces Rebels in Oxford
Next Red Sox to the World Series: “It’s Not Over”