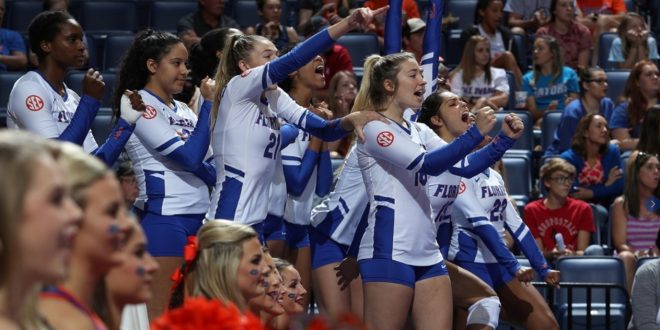 This is the second match this season between the two squads.

Florida made quick work of the Rebels in their SEC opener back on Sept. 21.

Holly Carlton led the way with 10 kills on that night. She posted a career-high in hitting efficiency with a whopping .833 percentage on 12 total attempts.

Paige Hammons and Allie Gregory contributed in the service game during that match with both recording four aces apiece.

Florida would walk away from that match with a 3-0 sweep over the Rebels.

Rachael Kramer became the second Florida player in as many weeks to earn a weekly honor. She was recognized on Monday as the SEC’s Defensive Player of the Week.

Kramer was one block away from registering a double-double against the South Carolina Gamecocks.  She recorded 11 kills and nine blocks that helped propel Florida to 7-0 in the SEC.

Gator Head Coach Mary Wise said Kramer is grading out solidly with the coaches when comes to her blocking prowess.

Wise said Kramer is altering shots and forcing hitters into changing their attacks even if she isn’t getting her hands on the ball.

“My blocking has slowly gotten better,” Kramer said. “It’s easy to get better in this gym.”

Back at Home on Sunday

The Gators will be back at home on Sunday afternoon for a match against the Missouri Tigers.

Missouri sits at 16-4 with a 6-2 conference record. They sit at third in the conference standings.

Allie Gregory said in a Tuesday availability that even though they were scouting Ole Miss that day, they were also vicariously scouting Missouri.

Mizzou sits in the top five in these statistics against conference opponents:

It will surely be a competitive match as Florida ranks in the top five in almost all of those categories too.