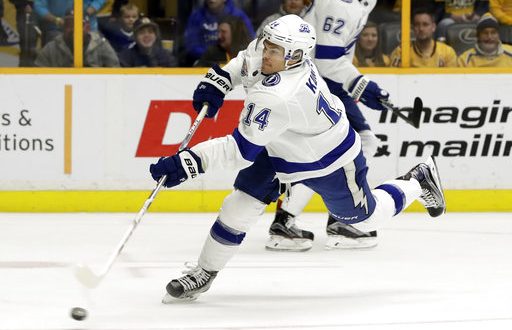 The Tampa Bay Lighting will be playing the Minnesota Wild Saturday. The Lighting currently have a 4-1 record and their only loss was to the Vancouver Canucks 4-1. The Wild have a 2-2 record heading into the game with the Lighting.

The Lighting beat the Detroit Red Wings 3-1 Wednesday night. Tampa Bay was the first to get on the board, when Brayden Point scored in the first period. Then Detroit answered back in the second period scoring their only goal in the game from Luke Glendening. Still in the second the Lighting’s Steven Stamkos scored another goal. In the third period, Alex Killorn scored again for Tampa Bay making the final score 3-1.

For the Minnesota Wild they last played on Tuesday when they beat the Arizona Coyotes 2-1. The Coyotes got the scoring started in the 1st period with a power play from Brendan Perlini. However, in the second period the Wild’s Mikael Granlund scored a goal to tie the game. Then in the third, Eric Staal scored the Wild’s second goal to make the game 2-1.

The Lightings game against the Minnesota Wild will be played in Saint Paul, MN. The Lighting on average out-score the Wild this season 5 to 3. Minnesota averages 2.3 goals per game, which ranks them 26th over all in the NHL. Tampa Bay is ranked 12th in goals per game averaging 3.4 a game. The Lightning have a PP% of 25.0 and the Wild have a 16.7 PP%. Tampa Bay leads the league in PK% with a perfect 100%. Meanwhile, Minnesota has a 80% PPK%.

The Lightings leader in goals scored is center Brayden Point with 4 goals. For the Wild it’s Jason Zucker with 3 goals. The assist leader for Tampa Bay is Yannie Gourde, who has 3 assists. With 6 assists Zach Parise has the most assists for Minnesota.

Tampa Bay will be facing Minnesota on Saturday at 8pm.