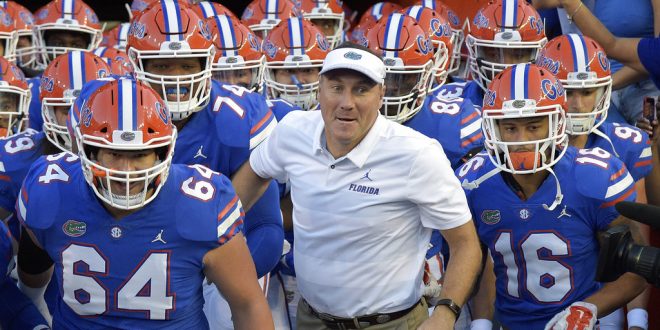 It was just a year ago that the Florida Gators suffered an embarrassing 42-7 loss to the Georgia Bulldogs at TIAA Bank Stadium, then EverBank Field, in Jacksonville.

This year, No. 9 Florida carries a five-game winning streak into its annual matchup against No. 7 Georgia. And CBS Sports commentator Gary Danielson shared his insight on the historic rivalry and the Gators’ newfound success.

Alabama’s Nick Saban and Georgia’s Kirby Smart both had their share of struggles during their debut head coaching seasons. And many expected Dan Mullen’s Gators to experience those same growing pains that are common for any program entering a new regime.

Florida’s rapid surge to success after compiling a 4-7 record last season has taken college football fans, analysts and more by surprise, and Danielson said he initially thought it would be a tough overhaul for the Gators entering the 2018 season.

For Danielson, the most impressive aspect of this team’s success this year has been the defense.

A 6-1 record and 4-1 conference record to start this season with many of the same players that took the field for the Gators last year has proved one thing to Danielson.

While Gators quarterback Feleipe Franks couldn’t buy success during his freshman campaign, Bulldogs quarterback Jake Fromm led his team to within one play of winning the national championship.

However, Franks’ progression this year has seemed to garner him more confidence and support from his coaching staff than Fromm has gotten. The Georgia quarterback has shared reps for much of the season with freshman Justin Fields.

Danielson noted the irony in the two vastly different quarterback situations and said it’s something he would have never expected.

Fromm is eighth in the SEC in passing yards with 1,409 yards. Franks sits directly under him at No. 9 with 1,406 yards. Franks has the advantage in total touchdown passes with 15 to Fromm’s 13. But Fromm is completing more passes, with a completion percentage of 66.9% to Franks’ 56.6%.

Both quarterbacks like to spread the ball to a handful of different receivers, and they’ll likely showcase that on Saturday.

The Bulldogs have primarily used Fields as a runner. And while he’s had plenty of success in the Bulldogs’ ground game, he hasn’t often been put in position to throw the ball.

Georgia’s two weeks of preparation may not have yielded enough time to put together those packages that allow Fields to throw, Danielson says. He feels the packages the Bulldogs have built for Fields won’t be enough when they face Florida’s pass rushers.

When Saturday’s 3:30 p.m. kickoff comes, it’ll be just the sixth time in the history of the Florida-Georgia rivalry that both teams meet with top-ten rankings.

Previous Who Will Get Their First SEC Win? Arkansas or Vanderbilt?
Next Mike White has Gators Prepared for Rigorous Season