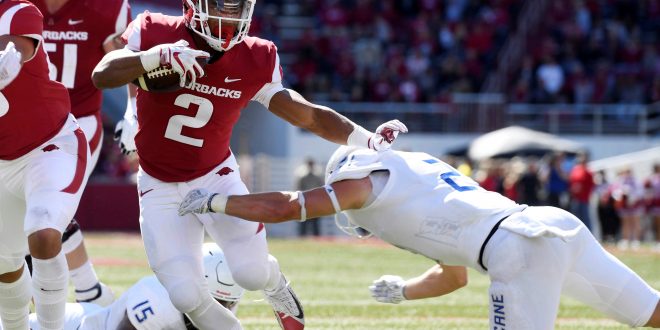 Arkansas running back Chase Hayden tries to get past Tulsa defender Bryson Powers in the second half of an NCAA college football game Saturday, Oct. 20, 2018, in Fayetteville, Ark. (AP Photo/Michael Woods)

Who Will Get Their First SEC Win? Arkansas or Vanderbilt?

On Saturday there will be a matchup of two SEC teams that are both 0-4 in the conference. Arkansas Razorbacks will host the Vanderbilt Commodores in Fayetteville, AR. Both teams will each be fighting for their first SEC win of the season this Saturday.

Will Vandy Get A Victory?

In a press conference earlier this week, Vanderbilt head coach Derek Mason said, “Its’ going to be a good ball game, but again it’s about our preparation, what we need to do. This football team will be ready to play.”

Vanderbilt prepares for an explosive matchup in Fayetteville, to put an end to their three game losing streak. So far this year the Commodores are 3-5 and 0-4 in the SEC under head coach Derek Mason. Mason is in his fifth year coaching Vanderbilt, and has been making progress in incorporating a stronger team. Most recently, Vanderbilt held a close game against no. 12 Kentucky eventually losing 14-7. Similarly, the Commodores led the game against now ranked ninth Florida until losing 37-27. Vandy plays an aggressive game, but they continue to fall short at the end.

Vanderbilt’s veteran quarterback Kyle Shurmur, has been around the block a few times. This 2018 season Shurmur has a total of 1,845 yards, 12 touchdowns and 5 interceptions. Razorbacks head coach Chad Morris says, “Kyle Shurmur has been there, and is a senior, and has been through the battles. Very well respected in this league and he’s done a lot of good things that are deep in running back.”

Head coach Chad Morris is in his first year coaching Arkansas. The Razorbacks are currently 2-6 and 0-4 in the conference. Freshman quarterback Connor Noland put up a fight this past weekend as they defeated Tulsa 23-0. The Hog’s defense were a highlight of the Tulsa game, as they were able to finish the game with a total of six sacks and one interception. The Razorback’s total yards allowed are 409.3. Similar to Vanderbilt’s 408.1.

Mason commented on Arkansas, “Even though Arkansas is running the football, it’s going to look different. They want to have explosive passes. They’ve got a quarterback, or quarterbacks, that can get the ball down the field. The idea for them is probably balance, just like it is for us so it’s going to be to be a good ball game.”

Arkansas will be hosting the game at Donald W. Reynolds Razorback Stadium this Saturday at 12:00p.m. EST.