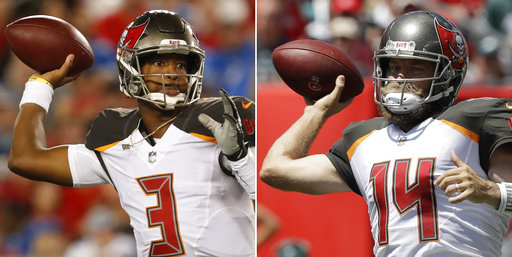 The Fitzmagic era will resume in Tampa Bay after Buccaneers head coach Dirk Koetter named Ryan Fitzpatrick the starting quarterback over Jameis Winston on Monday. The quarterback change came after a disappointing 34-37 loss to the Cincinnati Bengals on Sunday.

Winston threw four interceptions against the Bengals before being benched late in the third quarter. In the fourth quarter, Fitzpatrick threw for two touchdowns and a two-point conversion, tying the game at 34-34 with a little over a minute left. Bengals kicker Randy Bullock scored a 44-yard field goal squandering Fitzpatrick and the Buccaneers fourth-quarter comeback efforts.

PSA: Fitzmagic is once again the starting QB for the Bucs pic.twitter.com/MfJU5wh4K3

The former first overall pick of the 2015 NFL Draft has had difficulty meeting up to the expectations of a franchise quarterback. Winston’s only winning season came in 2016 when the Buccaneers went 9-7.

At the beginning of the season Koetter noted that despite Fitzpatrick’s talent and leadership, Winston was seen as a franchise quarterback and would get to the job as starting quarterback.

In his four seasons with the Buccaneers, Winston’s spurts of success have been overshadowed by constant turnovers and inconsistency.

Each season of Winston’s career has consisted of at least 10 turnovers. Despite only playing in four games this season, Winston has already thrown for 10 interceptions.

Jameis Winston has 10 INT in his last 13 quarters.

That's tied for the most INT this season; he missed the first three games. pic.twitter.com/H9GLWinEp8

Winston’s inconsistency and a problematic number of interceptions resemble Fitzpatrick’s struggles during his time with the Buffalo Bills and New York Jets.

Fitzpatrick’s recent success with the Buccaneers has also seen flashes of inconsistency. In Week 4 against the Chicago Bears, Winston replaced Fitzpatrick halfway through the game.

Fitzpatrick remained the backup quarterback to Winston until playing against the Bengals on Sunday. This season, Fitzpatrick has thrown for 11 touchdowns and five interceptions.

He brought the @Buccaneers all the way back.

Fitzpatrick makes his first start since Week 4 against the Carolina Panthers next Sunday in an NFC South division matchup.