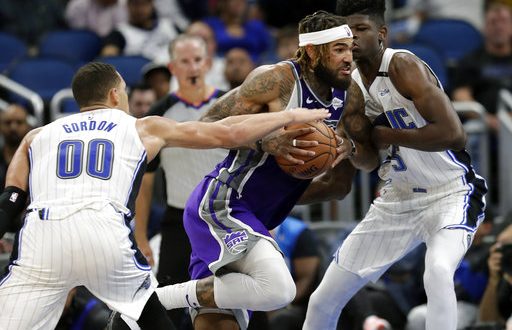 Magic Fall to Kings at Home

The Sacramento Kings defeated the Orlando Magic at Amway Center by a score of 107-99.

The Magic had a decent first quarter, putting up 31 points and outscoring the Kings by five. After the first, however, it was all Sacramento and no Magic. Orlando struggled from the field in a big way. They only hit 39.6 percent of their field goals for the night including an awful 25.6 percent from three. The Magic took 43 shots from beyond the arc and only hit 11 of those attempts. This is the second straight game that the Magic have taken 43 triples. Last time out against the Bucks, Orlando hit just 10 of those 43. The third quarter was the low point of the night for the Magic as they were outscored 26-16.

“Inability to score in the 3rd quarter was the biggest part of the game.”@OrlandoMagic head coach Steve Clifford reacts to the loss to the visiting Sacramento Kings, mentioning @EvanFourmizz and @TheRealMoBamba’s performance and the Magic’s shooting confidence. #NBA #PureMagic pic.twitter.com/58nW3ThuNB

Not many would have predicted the Kings to be in the position they’re in. Yet, here they are. They have won four straight games and currently sit at 5-3 on the season. They are a team with a lot of young talent led by Buddy Hield, De’Aaron Fox and Willie Cauley-Stein. Buddy Hield looked like a star in the win. He put up 25 points on 9-15 shooting along with 11 rebounds and three assists. Fox added 14 points and 5 assists despite playing through a back injury. Cauley-Stein continued to have an inside presence with 14 points and 11 rebounds. Nemanja Bjelica, who has been a surprise standout for Sacramento, added 21 points, 8 rebounds and hit three shots from beyond the arc. The season is still very young, but the Sacramento Kings have impressed the NBA world thus far.

Despite the loss, the Magic did have a few bright spots. Aaron Gordon continued to be the team’s leader. He had 18 points, 10 rebounds, three assists, two steals and two blocks. Nikola Vucevic turned in a solid performance with 15 points, 15 rebounds and five assists. Rookie center Mo Bamba showed his great defensive potential, recording seven rebounds, five blocks and a steal in just 24 minutes.

Even though the team didn’t shoot very well, they did effectively pass the ball. Orlando recorded 28 assists on the night. This has been a strength of the team all season as they currently rank 8th in the league with 25.o assists per game.

This is a very young NBA season. The Magic are just 2-5 so far, but they have shown potential. If Orlando can start scoring the ball more effectively and consistently, they will be a very competitive team. The team has a couple days to work on their game in practice before they host the Los Angeles Clippers on Friday. For the Kings, they will try to win their fifth straight game against the struggling Atlanta Hawks on Thursday night in Atlanta.