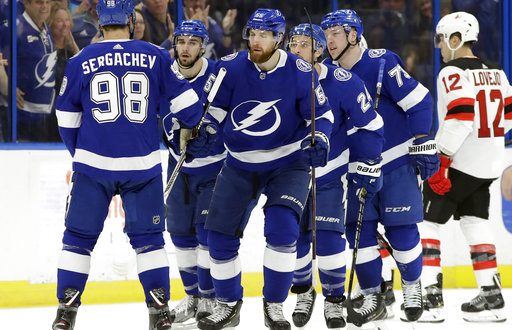 Lightning Dominate the Devils in 8-3 Win

The Tampa Bay Lightning put on a dominant performance at home, defeating the New Jersey Devils in an 8-3 rout.

After a disappointing 7-1 loss to Arizona on Saturday, the Lightning responded in a big way against the Devils. The Tampa Bay offense was absolutely red-hot on Tuesday night. The team scored eight goals against the team they defeated in the last year’s playoffs. This is the second time Tampa Bay has put up eight goals in one game this season, making them the only team to score more than eight goals in multiple games this year. The Lightning got 44 shots on goal, which is the second-highest number of their season so far. Tampa Bay scored on two of their three power plays. They also won 60 percent of their faceoffs for the night.

The Lightning had some great individual performances that contributed to their win. Brayden Point, who has seven goals and seven assists so far this season, had a career high in points. He scored one goal and assisted on four.

Cooper on Point: “To shut down those top lines and then get points on top of that, that’s what makes him the player that he is.” #NJDvsTBL

Nikita Kucherov had a fantastic outing, putting up two goals and one assist. Steven Stamkos and Ryan McDonagh each had a goal and two assists. Braydon Coburn had himself a two-goal night, and Yanni Gourde had three assists. Aside from Brayden Point’s five points, the Lightning had four players achieve three-point games and two players with two points each.

Aside from two poor performances, the Lightning have gotten out to a fast start. They are 8-2-1 (one overtime loss.) They are an extremely talented team. Tampa Bay won 54 games last year, and they are looking to build on last year’s great season. They were one win away from the Stanley Cup Final in last year’s playoffs. The team is third in the league in scoring with 3.64 goals per game. They are eighth in the league in fewest goals allowed with 2.73 per game. It’s been a good start for the Lightning this season. Anything other than a high seed and a deep playoff run would be a surprising outcome from Tampa Bay’s season.

Next up for the Lightning is a home game against the Nashville Predators on Thursday night at 7:30 p.m. ET.

Previous Magic Fall to Kings at Home
Next NFL Trade Deadline Recap: Fowler Jr. to the Rams, Tate to the Eagles