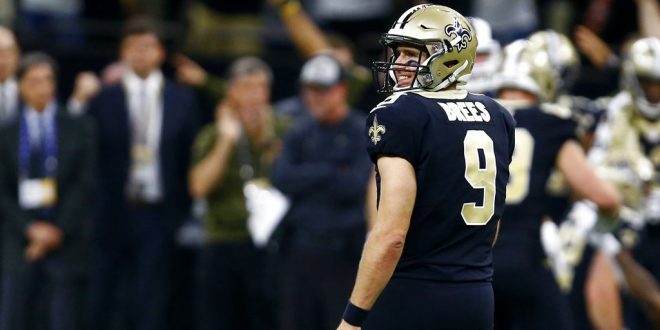 New Orleans Saints quarterback Drew Brees (9) smiles after converting a first down to clinch the win in the second half of an NFL football game against the Los Angeles Rams in New Orleans, Sunday, Nov. 4, 2018. The Saints won 45-35. (AP Photo/Butch Dill)

Even with the Monday Night contest of the Tennessee Titans and the Dallas Cowboys still yet to commence, Week 9 of the NFL season lived up to all the expectations. Here are some of the best matchups from the weekend.

The New Orleans Saints and Los Angeles Rams entered the Mercedes-Benz Superdome with one loss combined in 2018. The much-anticipated contest lived up to the expectations with high-flying offenses and great plays all over the field.

The Saints scored a touchdown in every drive but one in the first half. Quarterback Drew Brees once again proved why he is one of the best quarterbacks in the league as he led the way in the 45-35 win. He had a rhythm with wide receiver Michael Thomas all game. Thomas ended the game with 12 catches, 211 yards and a 72-yard touchdown to ice the game late in the fourth quarter.

Brees praised his young receiver for his performance after the game.

The highly touted Rams’ defense could not keep up as Brees finished the game with 346 yards and four touchdowns, outshining Rams’ quarterback Jared Goff’s three-touchdown performance.

But one the biggest keys to the Saints’ win, however, was their offensive line. Their front five held LA’s defensive line, who came into the game with 22 sacks, to zero sacks and just four quarterback hits. They also pushed the line in the run game, allowing the backs to combine for 141 yards on the ground and two rushing touchdowns.

The Rams suffered their first loss of the season and will look to redeem themselves against the Seattle Seahawks on Sunday. The Saints’ take their seven-game win streak to Cincinnati to play the Bengals.

Sunday Night Football saw arguably the two best quarterbacks meet for possibly the last time in their careers. Tom Brady and the New England Patriots welcomed Aaron Rodgers and the Green Bay Packers in what was expected to be another shootout. But it was the defense that won the day.

While New England’s defense registered just one sack on the elusive Rodgers, it pressured him all day. Six quarterback hits helped allow just six yards a reception for the entire game. This made it easy for Brady and the defense to come out on top 31-17. This was the lowest score that the Packers were held to since Week 3 against the Redskins.

New England’s offense did the rest. Brady finished with 294 yards and a touchdown. Wide receiver Julian Edelman also got in the passing game, throwing a 37-yard screen pass to James White in the fourth quarter to set up a White touchdown on the ground three plays later.

The Patriots travel to Nashville in Week 10 to play the Titans and look to make it seven wins in a row. The Packers will look to avoid a three-game losing streak when it welcomes the Miami Dolphins.

The Kansas City Chiefs continued the string of great offensive performances on Sunday when they traveled to Cleveland to play the Browns on Sunday.

Second-year quarterback Patrick Mahomes became the second player in the NFL to throw for 300 yards in eight consecutive games in a single season. He threw for 375 yards and three touchdowns in the 37-21 win. Tight end Travis Kelce carried a big load, hauling in seven passes for 99 yards and scoring twice. Running back Kareem Hunt also got in the end zone twice on the ground and tallied 91 yards on 17 carries.

The Chiefs seem unstoppable with one of the best offenses in the league. The Browns, on the other hand, continue to slide after a promising start to the season. Interim coach Gregg Williams, who filled in for Hue Jackson who was fired after a loss the week before, could only watch as his defense gave up almost 500 yards of total offense.

The Browns will look to snap a four-game losing streak next Sunday when they take on the Atlanta Falcons at home. Chiefs will play the Arizona Cardinals sporting a three-game win streak.