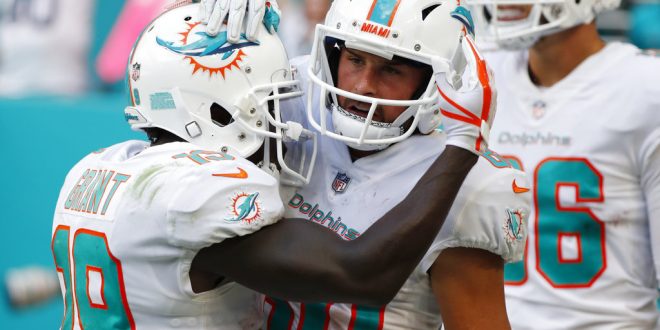 After a promising 3-0 start to the season, the Miami Dolphins have lost four of their past five games. They sit at 4-4, which is two full games behind the division-leading New England Patriots.

The Dolphins are hoping to gain some ground in the division as they host the 3-5 New York Jets on Sunday. Both teams have lost two in a row and can’t afford to take another defeat.

In the first meeting of the season between these two teams, the Dolphins won 20-12 in New York.

What to Expect From Miami

The Dolphins struggles to start at the quarterback position. Ryan Tannehill has been sidelined for the past three weeks with a shoulder injury, so Brock Osweiler will be starting his fourth straight game at the helm.

Osweiler has been average for the Dolphins in his three appearances, completing 75 of 117 attempts (64.1%) for 895 yards, six touchdowns and three interceptions. Osweiler and Tannehill have combined for 226.3 passing yards per game, which ranks 23rd in the league. They have also averaged 21.8 points per game, which is 22nd overall.

The rushing game has essentially been split down the middle between Frank Gore and Kenyan Drake. Gore has rushed 84 times for 385 yards (4.6 yards per attempt). Drake has 70 attempts for 340 yards (4.9 yards per attempt) and three touchdowns. Drake also poses as a receiving threat out of the backfield, adding 27 receptions for 197 yards and two touchdowns.

The receiving core has been paced by Albert Wilson, Danny Amendola, Kenny Stills and Jakeem Grant. All four have had relatively even production across the board.

Defensively, the Dolphins are led by Kiko Alonso, Reshad Jones, Minkah Fitzpatrick and Xavien Howard. The Dolphins give up 27.4 points per game, which ranks 27th in the league. Much of this has to do with the average time of possession. The Dolphins have the ball for an average of 27 minutes and 33 seconds each game, which is the second-worst mark in the league. This forces their defense to spend excess time on the field.

What to Expect From New York

Isaiah Crowell, who has 94 attempts for 484 yards (5.1 yards per attempt) and five touchdowns, controls the backfield. The receiving core is led by Robby Anderson and Quincy Enunwa. Anderson has 17 receptions for 314 yards and three touchdowns. Enunwa has 22 receptions for 287 yards and one touchdown.

Previous Amid the Cowboys’ Struggles, Troy Aikman Calls for Change
Next No. 1 Ranked Kansas Outlasts No. 10 Michigan State in Champions Classic Showdown