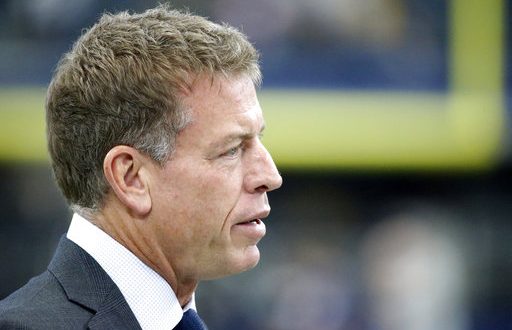 Amid the Cowboys’ Struggles, Troy Aikman Calls for Change

After the Cowboys dropped to 3-5 on Monday night, former Dallas quarterback Troy Aikman cited the need for change within the organization.

Troy Aikman isn’t being shy about criticizing the Cowboys. After a 28-14 loss to the Tennessee Titans on Monday, Aikman spoke out to the media advocating for change in Dallas.

Three years ago, in Dak Prescott and Ezekiel Elliott’s rookie seasons, Dallas went a stunning 13-3 and won the NFC East. Last season, they went 9-7 and missed the Playoffs. This year, the Cowboys are just 3-5. For a team with so much young talent, they are on a surprisingly sharp decline. It’s easy to tell things aren’t working as they should in Dallas.

Aikman, who led the Cowboys to three championships in the 90s, said “in a lot of ways, there’s a lot of dysfunction” and that “has to change” for the team be consistently competitive. Aikman also said he feels the organization needs a “complete overhaul.”

Troy Aikman this morning on @dfwticket: “If you’re asking me, I’d say there has to be a complete overhaul of the entire organization.” pic.twitter.com/jlhbaMXLIt

It’s Not So Hot in Jerry World

From Aikman and plenty of others, Cowboys’ owner Jerry Jones seems to be getting a lot of heat for his team’s struggles. Aikman said that Jones’ lack of change is a big issue for how the organization runs. A major source of criticism for Jones is Jason Garrett, the team’s head coach. Garrett has been the Cowboys’ coach for nine seasons. He is 70-58 with two postseason appearances and just one postseason win. Garrett is on the hot seat, but Jones recently said that he is not expecting a change at head coach.

Jerry Jones, asked very bluntly if he can imagine himself making a head coaching change during the season: “No.” Says he doesn’t foresee any more coaching changes this season. #cowboyswire

Jones said that his team’s record is “cause for concern.”

There’s little to be happy with so far for Dallas. Still, it is only halfway through the season. The NFC East doesn’t have a juggernaut team at the moment. The Redskins sit at 5-3 but have recently caught the injury bug. The Eagles are 4-4, but the Cowboys can jump them in the standings if they beat Philadelphia this weekend. The Cowboys are still in the playoff hunt for now.