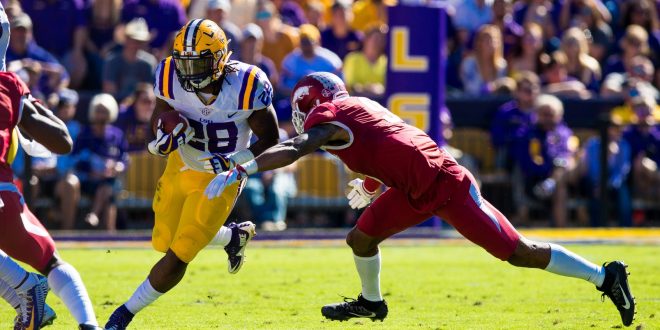 An SEC match-up that brings a great game every year. The No. 7 LSU Tigers will travel to Fayetteville to take on the Arkansas Razorbacks.

LSU is coming off a 29-0 loss against the Alabama Crimson Tide, but for them, it isn’t holding their heads down.

“It’s been great, the guys have been great. Came in with a tremendous attitude on Monday, good attitude yesterday,” LSU head coach Ed Orgeron said. “Expect to have a great day today.”

For the Razorbacks, their bye week was needed.

“Last week gave us a great opportunity just to focus on ourselves as we continue to do and just worry about getting better,” Arkansas head coach Chad Morris said. Both Teams Coming into Saturday

After a tough loss, the Tigers are still looking to win out on the season for a chance in a good bowl game. On the defensive side of the ball, their back-end is extremely fast and talented while they are No. 2 in the country for interceptions. Rashard Lawrence and Devin White continue to be great assets on that side of the ball.

The past week allowed the team to get players healed up and focus on themselves as a team. Coming off their loss against Vanderbilt, it showed a step-back in their improvement. The team started to show steady improvement with their inconsistency throughout the season.

“We gotta focus on ourselves, we got to execute at a high level and get good at the little things,” Morris said.

A yearly game in the south sparks the rivalry between the two teams. Arkansas last beat the Tigers 31-14 back in 2015 at Death Valley. Since then, the Tigers have come out on top the past two years.

Arkansas is coming in knowing to watch the change of LSU’s tempo throughout the game and the back-end of their defense. They have yet to win an SEC game this year and hope to have a big win against LSU. They also were able to put up 31 points on Alabama while they shut out LSU.