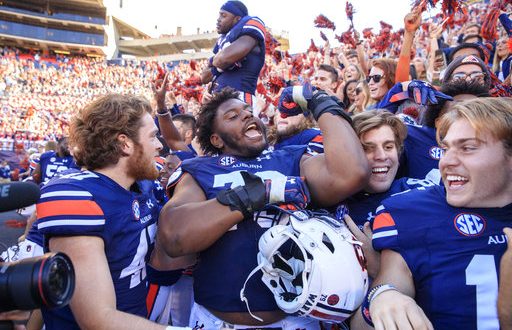 Auburn Travels to Athens for Ranked Matchup with Bulldogs

Georgia and Auburn will meet for the third time in the last 365 days.

The No. 24 Auburn Tigers head into Athens to take on the No. 5 Georgia Bulldogs for the 2018 edition of the South’s Oldest Rivalry. It will be the fourth showdown between Guz Malzahn and Kirby Smart.

This rivalry has produced some big games in recent memory like the Prayer at Jordan-Hare. Both squads met twice last season in matchups with heavy playoff implications.

The Tigers got the best of the then-ranked No. 1 Bulldogs in their regular season bout. They ended Georgia’s bid at an undefeated season with a 40-17 win.

Running back Kerryon Johnson showed out against a stout Bulldog defense to the tune of 167 rushing yards, 66 receiving yards and a touchdown.

Auburn racked up 488 yards of offense while limiting the Georgia attack to 230 that includes holding them to a season-low 46 yards on the ground.

That Georgia team came into the game averaging nearly 280 yards per game running the football.

But, Georgia got the last laugh when the two met in Atlanta for the SEC Title.

Fresh off a win against the top-ranked Tide, Auburn came in poised to be the first two-loss team to reach the College Football Playoff with a win that day.

The Bulldogs had other ideas and flipped the script from Week 10.

It would be Georgia to earn that spot in the College Football Playoff.

Back to the Present

Fast forward to 2018 and one team is on the same track as 2017 while the other fails to keep pace.

Smart’s team still has a dynamic duo at tailback with Elijah Holyfield and D’Andre Swift. Holyfield is the team’s leading rusher with 674 yards, but Swift isn’t far behind with 655.

Smart on his running backs:

Malzahn said the staff is familiar with Holyfield because they recruited him as a high schooler. He said he’s unsurprised by Holyfield’s production this season.

“What really stands out to me is both running backs do a good job of breaking tackles,” Malzahn said.

Holyfield and Swift will look to find some open space against an Auburn team that allows 133 yards per game on the ground but ranks third in the country in tackles for loss with 78.

“As long as we fit our gaps and stop the run, I think we’re a good defense,” Malzahn said.

Auburn currently has the conference’s 11th best rushing offense compared to being fourth this same time in 2017.

Although this Georgia defense is stout it still has a lot of inexperience that Malzahn can use to his advantage.

This rivalry’s newest chapter will be written at 7 p.m. on Saturday on ESPN.