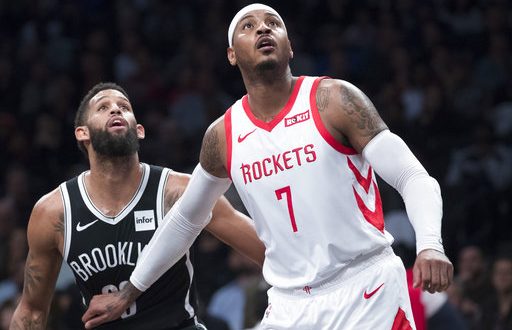 Carmelo Anthony not the problem for Houston

Is Carmelo Anthony the reason for the Houston Rockets 4-6 start?

The Rockets are now 4-6 through ten games and sit at 12th in the Western Conference. Many are surprised at that start after coming off the best record in the NBA last season and being just one game shy of going to the NBA finals.

According to Head Coach Mike D’Antoni, Anthony is not the reason for the way the Rockets have been playing.

As people wonder what happened to the Rockets from last year, many people want to put the blame on Anthony.

D’Antoni says that Melo has been doing everything the coaching staff has asked.

“Melo’s been great. He’s started some games and didn’t start some games,” D’Antoni said. “Melo played a lot of minutes and little minutes. He’s been super in everything we’ve asked of him.”

“It’s extremely unfair that Melo is being single-legged. If you look at every player on our roster, they are below career numbers,” Morey said.

He said he is encouraged with the direction of things since the start of the year. He emphasized that they are nowhere near where they expect to be.

“We have high expectations and we’re going to stick to that,” Morey said.

Morey said he does expect Carmelo to be playing in the rotation when he is healthy.

“Melo has been great here. He’s like a brother to me. He’s been working hard every day so we will see what happens,” Paul said.

Dwyane Wade doesn’t seem to happy about the rumors on Anthony. He actually seems to have identified another problem with the Rockets.

Trying to make my guy @carmeloanthony the fall guy huh!? Man y’all need to stop. That’s the easy way out instead of addressing what the real problem.

Kevin Smalls is a fourth year journalism student on the sports and media track from Jacksonville, Florida. He aspires to be a sports writer on the high school and collegiate level. He is currently taking courses at the University of Florida in the sports writing field to learn what it takes to be a sports writer. He writes web stories for ESPN Gainesville. He also informs the public of local, state, and national on sports trending for ESPN Gainesville.
Previous Buccaneers are sticking with Fitzpatrick
Next Lightning Fall Short to Sabres, Lose 2-1 On Road