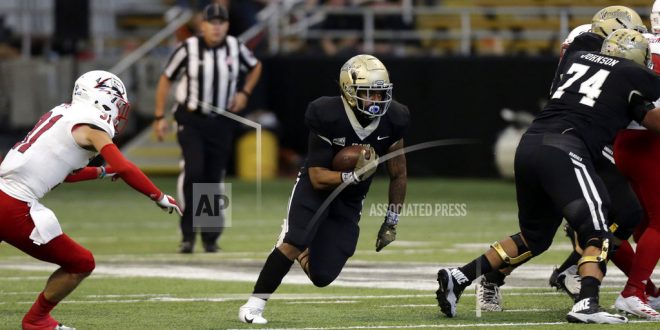 Idaho running back Isaiah Saunders finds a hole to run through against Southern Utah in the first half of an NCAA college football game, Saturday, Oct. 20, 2018, in Moscow, Idaho. (Kai Eiselein /The Moscow-Pullman Daily News via AP)

Idaho comes to Gainesville for matchup with Gators

Finally, Idaho gets a chance to play more than one snap in Ben Hill Griffin Stadium against the Florida Gators.

The last time the Vandals came to Gainesville, a lightning storm forced the contest to be canceled. The teams would not reschedule the game.

The 2018 season marks a return to the FCS level for Idaho.

The move down hasn’t paid off for the Vandals in the win column this season. Idaho has struggled to a 4-6 record and has yet to win a game away from the Kibbie Dome.

The Vandals are coming off a sluggish performance against the University of Montana, falling behind 43-13 late in the third quarter before falling 46-27.

Bright spot at quarterback and running back

Despite the struggles, the play of quarterback Mason Petrino has been solid.

The real offensive catalyst for the Vandals is running back is Isaiah Sanders. The redshirt senior from Elk Grove, California is knocking on the door of the 1,000 yard rushing club, having amassed 878 on the ground and scoring six touchdowns.

His 234-pound frame is a task for any defense to take down. His bruising style of running will be a focal point for Idaho’s offense against the Gators.

Goal against the Gators

Idaho isn’t expected to beat Florida, let alone compete with the nation’s 13th ranked team. The goal for the Vandals is to simply come out of the game without sustaining any serious injuries heading into the offseason. On top of that, a strong performance from their stars would bring validation to the program and help reestablish Idaho in the FCS.