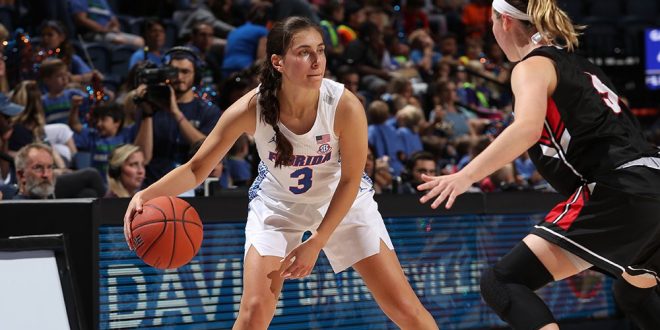 The Florida women’s basketball team has had a rough start to the season. The team is 0-3 after two away games last week against FSU and Mercer. This is the first time the team is 0-3 since the 1979-1980 season. Now, they hope to grab their first win on Sunday as they host the Northwestern Wildcats.

This is the second time the two teams will face each other with the last matchup in November of 2016. In the previous contest, the Wildcats outscored the Gators by only five points with the final score of 73-68. However, Florida entered that matchup undefeated (4-0). Sunday’s game will be one of three Big 10 matchups the Gators will face with season with Indiana and Ohio State as the other teams.

Florida’s improvements are not enough for wins

The Gators have continued to improve from their season opener. Last time Florida was home, the team shot 16.7 percent (4-of-24) beyond the arc. But against Mercer, the Gators shot 46.2 percent from the three-point line (12-for-26).

Funda Nakkasoglu and Delicia Washington have been the backbone for the team this season. During Thursday night’s game against Mercer, Washington locked in a career high of 33-points, and 25 of those points were in the second half alone. Nakkasoglu finished with 23 points which include five from the three-point line.

“When you look at what Funda and Delicia have done so far this season, it is really all about their leadership,” Florida Coach Cam Newbauer says.

The Gators outscored the Bears, 34-23 in the fourth quarter after trailing by 21 points in the third quarter. However, this wasn’t enough for the Gators to grab a win as Mercer won 92-82.

Northwestern’s perfect start to the season.

In contrast, the Wildcats have had a terrific start to the season with a 3-0 record.  In their most recent matchup, NU defeated University of Illinois at Chicago, 87-44. ‘Cats guard Lindsey Pulliam set the tone, scoring the first six points. She continued that momentum finishing the night with a season-high of 22 points.

Lindsey Pulliam starting us off in Welsh-Ryan. pic.twitter.com/qOljqZi7l0

However, Pulliam wasn’t the only one who had a stellar night, three other Wildcats locked in double-digit points: Abi Scheid (16), Bryana Hopkins (14) and Jess Sancataldo (10).