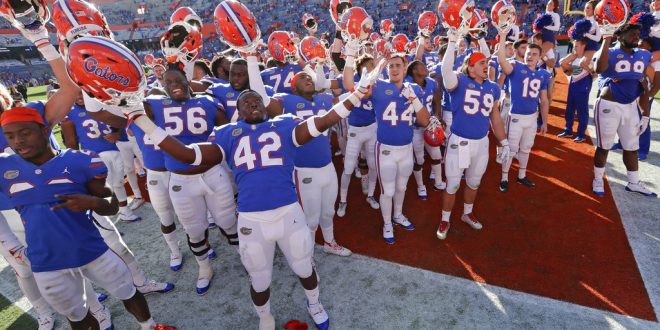 The Gators are preparing for everyone’s arguably one of the best rivalry games of the year.

The Seminoles host the Gators in the Sunshine Showdown this Saturday. Although FSU is currently 5-6 and unranked, the Gator offense aren’t taking the Seminoles lightly.

Beginning the 2018 season, the Gators established a new spread offense under new head coach Dan Mullen. Since the beginning of the season, offensive players feel as though they are understanding the new system and building everyday. In preparation for Saturday’s game, Florida is working just as hard, if not harder in practice.

Wide receiver, Josh Hammond, says the Gators are having a fun season, and seeing their success has also been more fun.

Quarterback Feleipe Franks says you don’t learn this offense just like that.

“Over time thing, you just keep on learning and learning and eventually when you get the whole offense down, you’re a super effective offense,” said Franks.

Hammond says it’ll be big for the Gators end the losing streak against Florida State and help the Florida Gators’ future. To help the Gators momentum going into Saturday, Hammond says working hard all week and not letting the opponent to dictate their practice is what will help them win.

Franks says it is always fun to play Florida State in the Rivalry game.

It has been 5 years since the Gators have been victorious over the Seminoles. Former Gator head football coach Steve Spurrier says it’s time the Gators start beating them consistently again.

Kick off for the Florida-Florida State rivalry game is set for noon on Saturday.