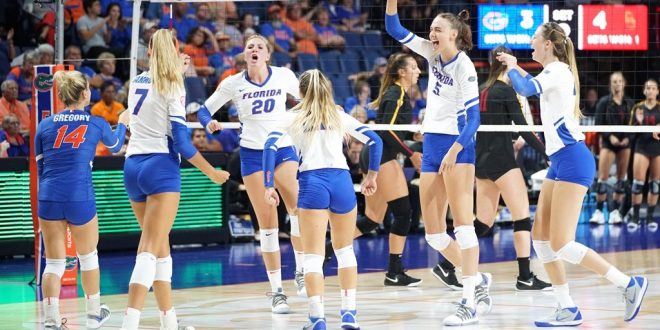 The Florida Gators will travel to Orlando, FL, to face Florida State University in the first round of the NCAA Tournament. The match is set for Thursday night at 4:30 p.m.

The Gators ended the 2018 season with a 24-6 overall record and 15-3 in Southeastern Conference play. The University of Central Florida and Florida Gulf Coast complete the other half of the bracket. The winner of the UF-FSU match will go on to face the winner of UCF-FGCU on Friday night at 7 p.m.

For the first time in seven years the Gators will not host the first and second rounds of the tournament in Gainesville, according to FloridaGators.com.

Hammons leads the team with 32 service aces and posted double-figure kills in seven matches this season. She’s recorded 231 digs this season which makes her third on the team.

Kellum became the first Gator to record 13 blocks in a match since Kelsey Bowers in 2006. Kellum also ranks 68th in the nation and sixth in the SEC in hitting percentage (.352).

This is Kramer’s third SEC honor, in 2016 she was named to the All-SEC Freshman team and last year she earned All-SEC accolades.

Hall became the first freshman to reach the 50-kill milestone in three matches with 53 kills. Additionally, Hall recorded double-figure kills in 16 of 23 matches she played in.

The Seminoles finished the 2018 season with a 19-9 overall record and 11-2 in the Atlantic Coast Conference. The Gators will take on the Noles for the second time this season. In September, the Gators defeated FSU 3-1 in Nole territory.

Kate Venezio is a fourth-year telecommunication-news student at the University of Florida. Kate does it all: Behind the camera she captures emotional moments as a photographer for the University of Florida Athletic Association. She's comfortable being in front of the camera, too. Kate interviews players, coaches, fans and family members for pre- and post-game coverage as a beat reporter for ESPN Gainesville/WRUF-FM. In addition, Kate produces the sports segment for the weekly WUFT News program. There, she's responsible for writing the script in its entirety to include production commands. The presentation includes video highlights and interviews taped and edited, and Kate then live anchors the final package on a daily deadline. In addition, she writes stories for wruf.com where she informs sports fans of local, state, and national trending topics. Kate also utilizes social media as a tool to help get the stories in front of viewers.
@@kate_venezio
Previous Coaching Changes Have Begun in College Football
Next Texans Glide Past Titans in 34-17 Win