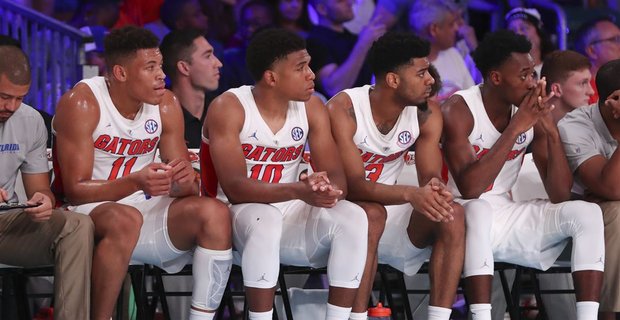 Gators Bounce Back With Convincing Win Over North Florida

The Florida Gators jumped out to a big lead in the first half and never looked back in their 98-66 victory over the North Florida Ospreys. Noah Locke led all scorers with 18 points on 7-11 shooting including 4-6 from beyond the arc. Deaundrae Ballard contributed 15 points, while KeVaughn Allen added 13.

The Ospreys kept it close for the first six minutes of action, but it was all Gators after that. A 11-0 run midway through the first half led to a 20-point halftime lead. Ballard sparked the Gators early, contributing 12 of his 15 points before the intermission. Keyontae Johnson also added 11 first half points.

Their defensive prowess was on display yet again after forcing 13 first half turnovers which led to 15 points. They also got numerous second chance opportunities, grabbing ten offensive rebounds which led to nine points.

One of the Gators’ biggest strengths this year is that they have the ability to throw out many different lineups and get major contributions from numerous players. This strength was highlighted on Tuesday night. Six different players finished with double-digit scoring.

They also assisted on 26 of their 39 made baskets, which emphasizes how well they moved the ball and played off of each other. Much of this can be attributed to the play of Andrew Nembhard, who finished with 11 assists and no turnovers. Mike White offered a ton of praise for his freshman point guard.

This ball movement was a key factor in the Gators’ shooting efficiency. They finished 39-69 (56.5%) from the field and an unbelievable 16-28 (57.1%) from three. The Gators tied an NCAA record with nine different players hitting at least one three-pointer. Their elite ball movement led to ample uncontested opportunities, which certainly contributed to their amazing shooting effort. While the Gators will not shoot with this type of efficiency every night, Mike White was thrilled with the offensive production of his team.

Defensively, they lived up to their adjusted defensive efficiency of 91.3, which ranks 9th in the country. They were consistently putting pressure on the ball and trapping to create turnovers. The Gators forced 16 turnovers which led to 19 points. They also limited the Ospreys to 24-58 (41.4%) from the field and 9-26 (34.6%) from beyond the arc.

The Gators rebounded extremely well as a unit, which has been a big weakness so far this season. They out-rebounded the Ospreys 42-25, with nine different players grabbing three or more boards.

The Gators will be heading to New York City to take on the West Virginia Mountaineers in the Jimmy V Classic on December 4th at 9:00 p.m. The game will be played in Madison Square Garden and is scheduled to be aired on ESPN.