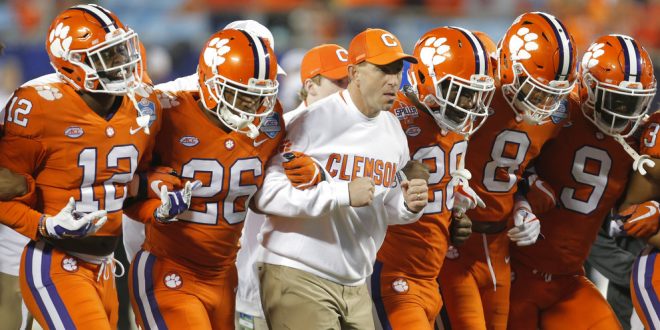 Three teams in the AP Top 25 remain undefeated, and the Clemson Tigers are one of them.

A 12-0 campaign has pushed them toward the top of the polls again and led them on a quest to try to get back to the College Football Playoff. About a year ago, the Tigers held the first seed but fell to the Alabama Crimson Tide in the semifinals.

Alabama would go onto win in the championship against Georgia while Clemson watched from home. Will the Tigers get back to college football glory?

Win the state: ✅
Next goal: Win the Conference

Through 12 games, Clemson has produced one of the country’s top offenses.

The Tigers are third in total offense with an average of 539.1 yards per game and fifth in scoring offense averaging 45.7 yards per game. During their win streak, Clemson has produced wins of 63-3, 59-10 and 77-16 and scored more than 30 points in all but three games.

In addition, the Tigers are in the Top 10 in red zone offense, scoring 55 times in the red zone (including 29 touchdowns on the ground).

Freshman quarterback and ACC Rookie of the Year Trevor Lawrence has been a big part of that offense. He’s thrown for 2,488 yards and a .662 completion percentage on the year. The conference’s Offensive Rookie of the Year has also thrown for 22 passing touchdowns and has accounted for 138 of the team’s 548 points.

Running back Travis Etienne has also been a force for the offense with 1,307 yards on the ground and 19 touchdowns. He put up 150 rushing yards and two touchdowns against South Carolina last weekend. Look out for the sophomore to continue to play a key role in the offense.

While the offense has gotten much of the attention, Clemson’s defense has held their own as the nation’s seventh best team in total defense (allowing an average of 283.2 yards per game). The Tigers are 24th in team passing efficiency defense and ninth in red zone defense. They gave up 35 points against the Gamecocks but will have a chance to rebound against Pittsburgh this Saturday in the championship game.

Clemson’s journey back to the playoff continues in the ACC Championship Game on Saturday at 8 p.m. on ABC.

@wclewis_uf
Previous The Unstoppable Force: Alabama Goes 12-0 in the Regular Season
Next Gators Bounce Back With Convincing Win Over North Florida