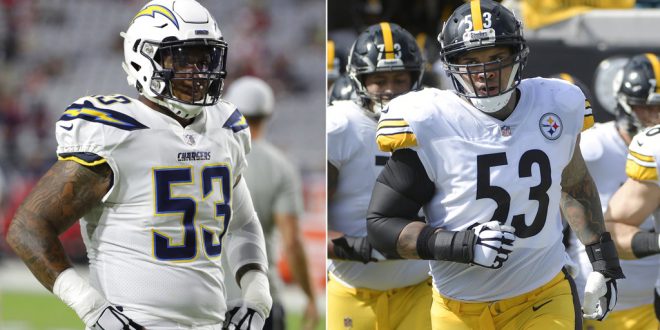 FILE - At left, in an Aug. 11, 2018, file photo, Los Angeles Chargers center Mike Pouncey (53) looks on during the first half of an preseason NFL football game against the Arizona Cardinals, in Glendale, Ariz. At right, in a Nov. 18, 2018, file photo, Pittsburgh Steelers center Maurkice Pouncey (53) runs onto the field before an NFL football game against the Jacksonville Jaguars, in Jacksonville, Fla. The Pouncey brothers will meet Sunday night when the Steelers host the Chargers. (AP Photo/File)

This Sunday, we have an AFC North and AFC West match up as the Pittsburgh Steelers host the Los Angeles Chargers in primetime.

The Steelers come into this game 7-3-1 for the overall season.

They sit 3rd in the league for passing yards per game averaging 325 yards. You can say this team likes to throw the ball rather than rushing.

With rushing yards they land themselves 27th in the league with only averaging 95.6 yards per game. So it is safe to say that the Steelers rely on their quarterback Ben Roethlisberger very much throughout the game.

The Steelers come into this game with a bit of a chip on their shoulders, losing their win streak to the Broncos last Sunday 24-17.

Leading up until this Sunday’s game a lot is going on with this Steelers team. Roethlisberger spoke on issues going on with his star receivers Antonio Brown and James Washington.

He threw 41-of-56 passes for 462 yards, also throwing two interceptions. That is their first loss since September to the Ravens.

The Los Angeles Chargers are on the road this weekend during week 13 of the regular season. They are coming off a win to the Arizona Cardinals 45-10 in this past Sundays match up.

Quarterback Phillip Rivers completed 28 of 29 attempts and passed for 259 yards for the game throwing three touchdowns. Rivers broke the NFL record with 25 consecutive completions in a single game. Melvin Gordon rushed for 61 yards and two touchdowns

The Chargers trail the Kansas City Chiefs by one game for the AFC West standings.

These two teams are both considered powerhouse teams in the AFC. Both of the teams have one of best records in the conference with the Chargers 8-3.

"They’ve got dynamic players on all levels."

This game is a highly anticipated game that should be high scoring one. Tune in Sunday at 8 p.m.