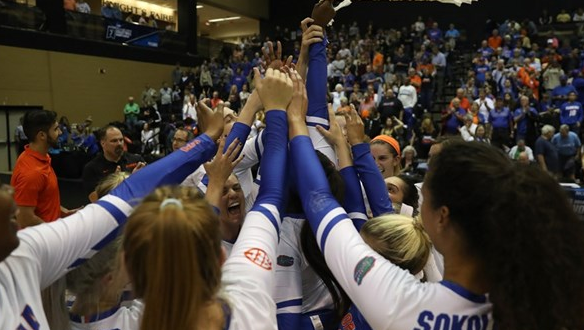 Another day, another sweep in the NCAA Tournament for the Florida Gators.

The No. 16 Gators (26-6) defeated the Florida Gulf Coast Eagles (27-7) 3-0 on Friday night to advance to the regional semifinal of the NCAA volleyball tournament.

“This team has obviously been through a lot,” Associate Head Coach Dave Boos said post match. “Lineup changes with so much youth, trying to find ways to win matches. To be able to come here and do this in two 3-0 sweeps is fantastic.”

Paige Hammons paced the squad in kills for the second straight match. She finished with 14 kills on 32 swings for a .281 hitting efficiency. The sophomore outside hitter recorded 30 total kills through just the first two matches of the postseason.

It’s her third straight match with double-digit kills dating back to the regular season finale against South Carolina.

Boos attributes her elevated play to Thayer Hall missing time due to injury. He said the load grew for Hammons when Hall was out, but now that same load isn’t as heavy anymore even with Hall back.

“The absence of Thayer Hall really helped Paige Hammons for the long term,” he said. “She is right now playing her best volleyball of her career.”

Another player who benefited from Hall’s injury was freshman defensive specialist Paula Cerame. She made several starts in the back row with her freshman counterpart out and has been making highlight-reel saves.

Boos said the Gators were able to get FCGU out of rhythm from the service line just like that did against Florida State. Getting the Eagles out of their system led to a plethora of kills for Florida. ‘

In addition, the Gators only allowed one ace in serve receive over both matches. Boos said an important factor in being successful in the tournament is the level of play in service.

“You have to win the serve-pass battle in the tournament,” he said. “Obviously, the further you go the more difficult that becomes.”

These last two matches will likely be the closest they’ll have to home crowds or being close to home for the rest of the tournament.

Barring an upset Saturday night, Florida will head to Provo, Utah for a regional semifinal match against BYU.

“I cannot thank Gator Nation enough for them to come down all the way to Orlando,” junior MB Rachael Kramer said. “That is what pushed us over the edge this weekend. Their support was incredible.”